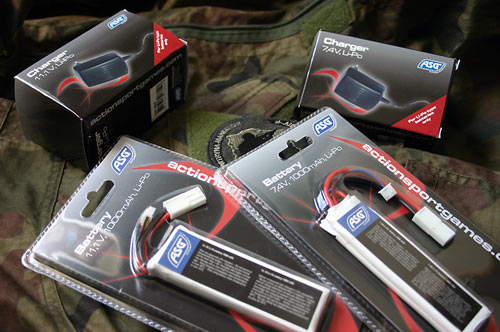 LiPo (also known as Lipoly) stands for battery built of lithium polymer cells. Cells consist of metallic lithium and conducting polymer. Single battery cell is usually rather flat, cannot be divided, with silver foil film plates. Construction is similar to lithium ion batteries with that difference that it uses solid or gel polymers instead of liquid electrolyte. One battery-cell is 2.8V at minimum charge, and 4.2V at maximum. Battery pack is usually built of two, three or more cells. In contradiction to  popular NiCd and NiMh batteries, Lipoly does not have 'memory' drawback, and what is more important, they cannot be discharged below 2.8V per cell. LiPo would not require formatting during first charging. In other words - every single charging would take exactly the same effect.

How to choose correct battery

LiPo battery packs are frequently marked (i.e. for model making): 2S1P, 3S1P and 2S2P, 3S2P. 'S' stands for serial and 'P' stands for parallel.
Granted that one cell is 3.7V with 1000 mAh capacity, symbols would stand as follows:

Above marks make it easy to define what cells battery pack consists of.

It is good if except of current and voltage, battery would be marked with maximum discharge current. It is respectively 10C, 15C, 20C and so on. If we buy a 1000mAh battery with 10C mark, we may connect it to a replica which gearbox would get 10A at max. If 10C would go with 2000mAh battery we can adequately reach 20A max need. There are as well marks '10C / 15C', where second value stands for short time maximum current support. So for lets say 10-20 s. we can use it to test replica with higher current need (to i.e. check power tuning). It is worth to remember that power tuning always would result in more than 10C current need - and it is well adviced to measure this value before buying a battery.

WARNING! Do not confuse above marks with 1C, which stands for recommended charging type, which I would introduce below.

What has been already mentioned, LiPo batteries has no so called 'memory' drawback - so we may charge it up, also without properly discharging, without danger it would loose some of its operating performance. When charging Lipol we have to follow two basic rules:

1/ Battery cells are charged with direct current, not exceeding 4.2V per cell. If our battery pack would consist of two cells, charger should give 8.4V, if three cells - 12.6V and so on. Charging usually takes about 60-90 minutes. If used regular charger though, we would surely cross 4.2V per cell, which would result in ignition. Chargers ready for LiPo batteries are charging each cell up to 4.2V, and then gradually lower the voltage till it reaches null. If you measure each cell during charging, every single one would reach 4.2V in about four thirds of charging time, then it is just lowering charging current till null.

2/ Battery pack is charged with 1C, so with current adequate to battery capacity. If battery is 1000mAh, we charge it with 1A. Based on tests, this current, would not give any damage to battery, of course with one condition - if we use proper micro-processor charger. You may come across the batteries, which producer gives higher possible current, like 1.5C, or 1.8C.  Nevertheless to extend the battery life it is recomended to charge it always with 1C current.

What is more, when you are into charging LiPo batteries, you may encounter something called 'balancer'. As you probably know, every single cell is a bit different to each other and it discharges in different manner during usage. When we use standard charger, it would just try to reach possible voltage of a battery pack. Let's take 7.4 battery, in which cell A is discharged to lower value than the cell B. If we charge with the standard battery pack, the cell B would reach 4.2V earlier than the cell A, charger would continue charging process and cell B would be overcharged. To keep the batteries in a good and stable shape, we have to use balancer.

Balancer is a small device which is built in the charger or manually put in the circuit between charger and the battery. Its job is to control every single cell charging state and balancing it during charging process. Balancer measures and adjusts voltage which is sent from a charger to a battery. At the end of charging, every single cell should be at 4.2V.

Nevertheless we should keep that in mind, not to leave LiPo batteries charging unattended, even if we are using the most appropriate charger. We should as well charge LiPo batteries away from inflamable materials. To protect yourself against possible ignition consequences, it is recommended to charge and store them in designated LiPoSack bags. 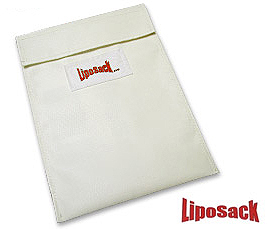 As it was mentioned before, LiPo cells cannot be discharged below 2.8V, though there are exceptions ready to be discharged even till 0V without cosnequences. When you discharge standard LiPo battery with two cells, you shall not discharge it below 5.6V, and with three cells - below 8.4V.

Because of that, to use LiPo battery in an airsoft gun, we have to install additional cut off device, which would prevent draining battery when it is close to minimum discharge level. We locate the cut off, between battery and plug in a replica. Preferably, it is better if this value is above 2.8V per cell, like 3V - because (as it was mentioned) discharge level of each cell varies in one battery pack.

Minimum discharge value in two cell battery pack equals to 5.6V. In theory, cut off should work at this value. Though it is possible, that one of the cells would be discharged as low as 2.4V, while the other still has 3.2V - which is still 5.6V. In this particular case - one of the cells is being damaged.

Battery should be kept with 40% of charge level - which is about 3.6V per cell. This is also charge value provided by the producer. You should not keep the batteries charged at minimum or maximum charge level. Obviously it applies to longer period of storage without using them. It is recommended to store batteries in LiPoSack which was mentioned above. Some users would store their batteries (charged in 40%) in a fridge. It is said to slow down torn off. Even though self-discharge would be minimum for LiPo batteries (in comparison to NiCd or NiMh), it is advisable to check if charging level hasn't altered.

In addition to mentioned above ways to break the battery by improper charging and discharging, they are very vulnarable to outer damage. At the first sight you may notice, their structure is delicate and there are no pretection covers against that kind of damage.

1/ Pay attention not to cause short circuit, during plugging battery to a replica, as well as during usage. Short circuit would mean temperature increase and - ignition. If such a short circuit happened it is advisable to wait 10-15 minutes and watch if such an ignition would occur.

2/ Do not charge or use, battery broken by mechanical means or by over-discharge, or over-charge. Such a batteries should be properly utilized. Keep that in mind, that every damage dealt to a battery or short circuit would lead to battery ignition which take a result after some time. 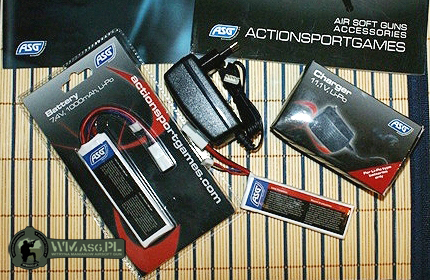 Chargers submitted for tests, are dedicated for batteries of 1000mAh capacity, having 1000mA charging current. Producer charging time: 90-120 minutes. Charging process is indicated by red LED, while charging complete by green LED. Tested chargers were measured with outgoing voltage of 8.4V and 12.6V, so exactly as it should be.

* Tested batteries have (as most of LiPoly) two sets of wires: 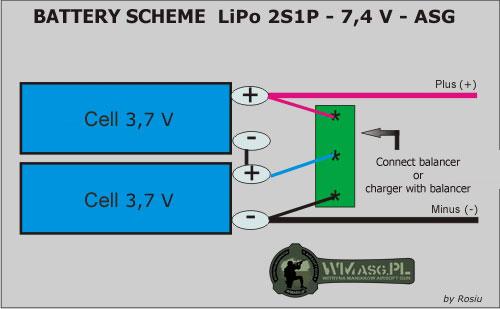 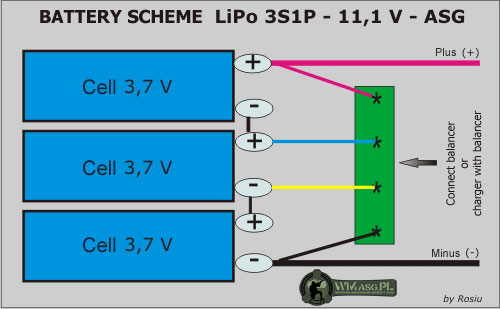 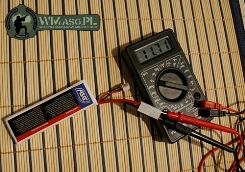 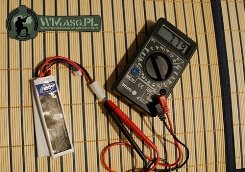 * 7.4V battery, in my opinion is not protected against possible short circuit. Connector plate is directly exposed to possible water contact (i.e. during rain) or other impurities what may result in short circuit. 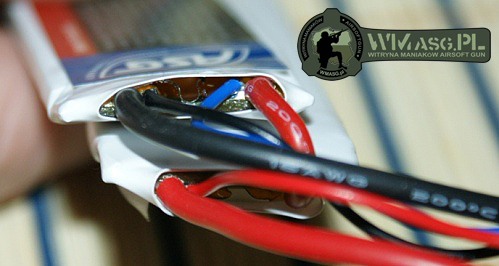 Both batteries connected for charging. 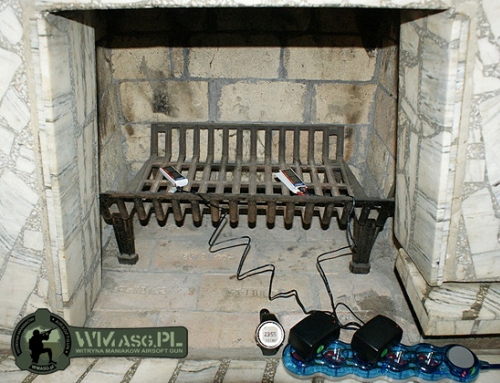 - 7.4V battery has charged completely in 39 minutes and reached voltage of 8.45V

- 11.1V battery has charged completely in 37 minutes and reached voltage of 12.7V 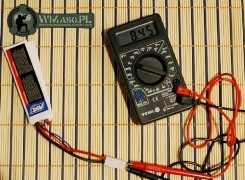 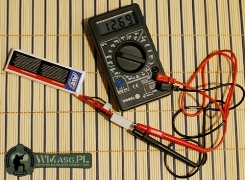 * Unfortunately batteries has no marks what is the maximum discharge current so we have to assume it is 10C.

Since both tested batteries are 1000mAh, maximum discharge current is 10A. Which means, we should only use them for stock airsoft guns - up to 330-350 fps. Replicas with stronger springs needs 15-20A. I don't even mention strong power tuning which may require even 30-40A.

Submitted for tests batteries with adequate chargers seems to be a good solution for players with replicas up to about 350fps, which would not need more than 10A current consumption and as well, who are usually attending short time games with less shooting (because of low battery capacity). To use those batteries we have to buy a cut-off device, or use them with a replica which is already equipped with one.

I would also encourage to additionally secure 7.4V battery (i.e. with insulating tape) to protect it against possible short circuit.

To rest of the players I would advise to buy batteries of higher discharge current and higher capacity. It is worth mentioning, that each of the batteries may be connected paralely to increase its properties. Example:

I would recommend it only to person with required skills and knowledge.

In the end, please enjoy a short movie - which presents mechanical damage given to tested batteries. I decided to test it with a nail, to give a chance for comparison with previously presented here on WMASG, Socom Gear batteries.

As far as I am concerned, test was favourable: short time between given damage nad smoke, no flames... big plus for that.

Batteries tested thanks to ActioSportGames A/S from Denmark: