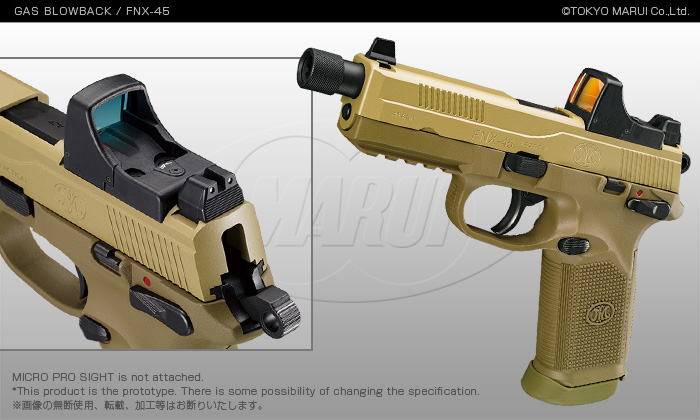 During the latest edition of the fair dedicated to the products of the Japanese manufacturer, next to such new items as the replica of the MK46 Mod.0 and AKS-47 Next Generation showed on our website, a replica of the FNX-45 has also been presented.
In this article
PAGE 1: New: Tokyo Marui FNX-45 Tactical

The new gas-powered replica model was produced under a license from the FN company. Originally, the .45 ACP caliber pistol is powered from a 15-rounds magazine. It was based on the FNP-45 Tactical design, made especially for the Joint Combat Pistol Program. Its aim was to determine a new handgun for the American troops.

Relative to the basic design, minor changes were introduced, however, they resulted in greater ergonomics. The slide has been redesigned so that the barrel rests lower. Thanks to this, the shooter can control the muzzle climb better. The gun has been present four interchangeable rear pistol grip panels. This allows the user to adjust the grip to his own anatomy to a limited extent. Another small change is the aggressive texture on the frame, causing the weapon to rest more firmly in one's hands.

Returning to the replica itself, it is to be made in the GBB standard, and its dimensions are to be as close as possible to the real firearm. The total length is 220 mm (218 mm in the original), the inner barrel measures 113 mm and the weight is 830 g (940 g in the original). The magazine holds 29 BBs is designed to work with the HFC134a gas.

As in the original, all manipulators are two-sided. After removing the plug behind the rear sight, it will be possible to mount a dedicated micro collimator (MICRO PRO SIGHT) without the need for any adapters. Under the barrel is a mounting rail made in the Picatinny standard, thanks to which the replica's user will be able to equip it with additional accessories, such as a laser / flashlight. The replica will also be delivered two pistol grip panels of different sizes.

The thread for muzzle devices used in FNX is to have the same parameters as that used in the HK45 Tactical. 18.11.2018Regdorn
In recent times, critical voices have often been heard about new products from Tokyo Marui. This time, the manufacturer put o...

21.11.2018Felipe7
During the 5th edition of the Tokyo Marui Festival, held on 17-18 November, the manufacturer presented a new version of the A...
Inne artykuły