Although it may seem unbelievable to many, replicas with a two part gearboxes were available on the market way back in the mid-2000s

It was probably in 2004, when the first AR replicas with a two part gearbox arrived at the stores. The first solutions of this type were used in the Japanese Systema PTW, PGC/ProWin and ICS replicas. Of course all of them differed between one another in technical details, but the main idea behind them was identical - the arrangement of the gears is the lower part of the gearbox frame that fits completely in the lower receiver of a replicas. The pneumatic system, i.e. the cylinder with the piston and the main spring, is an independent part fitting entirely in the upper receiver. Both parts of the mechanism work together only after being connected and secured with pins (in the PTW it is necessary to connect both parts of the receiver of the carbine replica). A smart and outstanding solution that, on the one hand, facilitates diagnostics and simplifies some repairs, on the other hand, actually allowing for changing the muzzle velocity of a replica "in the field". In the ICS and the PTW the complete upper part of the gearbox was exchanged, in the PGC/ProWin you had to have an hex key, because in this design the spring itself was exchanged, similarly as in today's quick replacement systems, but more slowly and less conveniently. 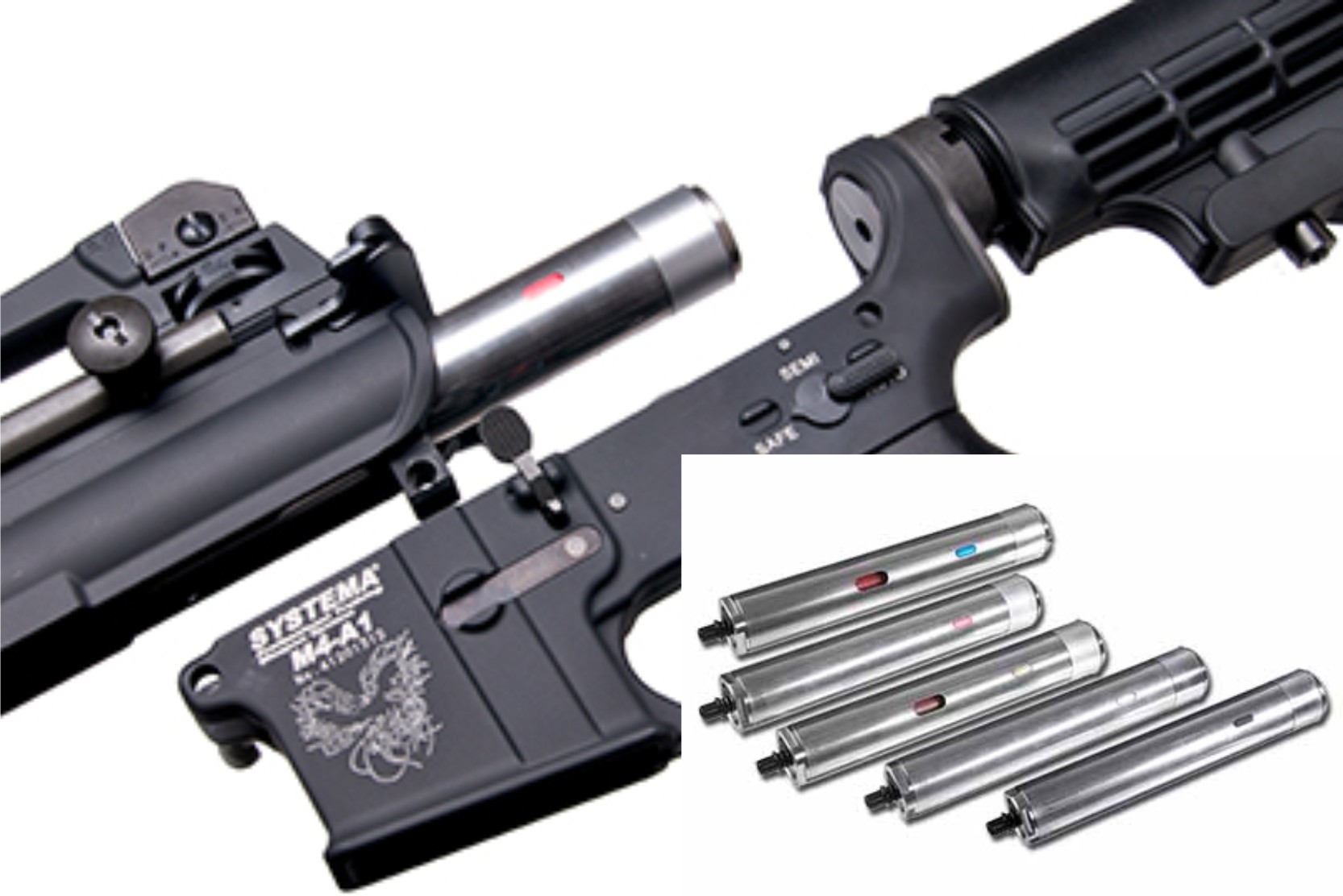 Since its beginning, Systema has positioned its PTW (professional training weapon) replicas as a premium product. That's why it costed a lot and completely went beyond the standard of gearbox frames and other parts set by Tokyo Marui. On the other hand, the PGC/ProWin aftermarket gearboxes used only standard parts, but they were made of high-quality aluminum and also costed a lot. It should be mentioned that whey were machined on numerically controlled machines and had factory applied ball bearings with a diameter of 8 millimeters of industrial quality and durability, while the stock standard were still 6 mm bushings. What's more, as the only one at that time, it had a HopUp chamber integrated with the upper half of the frame. Today, similar gearboxes are produced by RetroArms. The current price of such a frame in Poland is 699 PLN (around 180 Euro). Nominally, a similar amount of money for a ProWin in the mid-2000s was unfathomable! 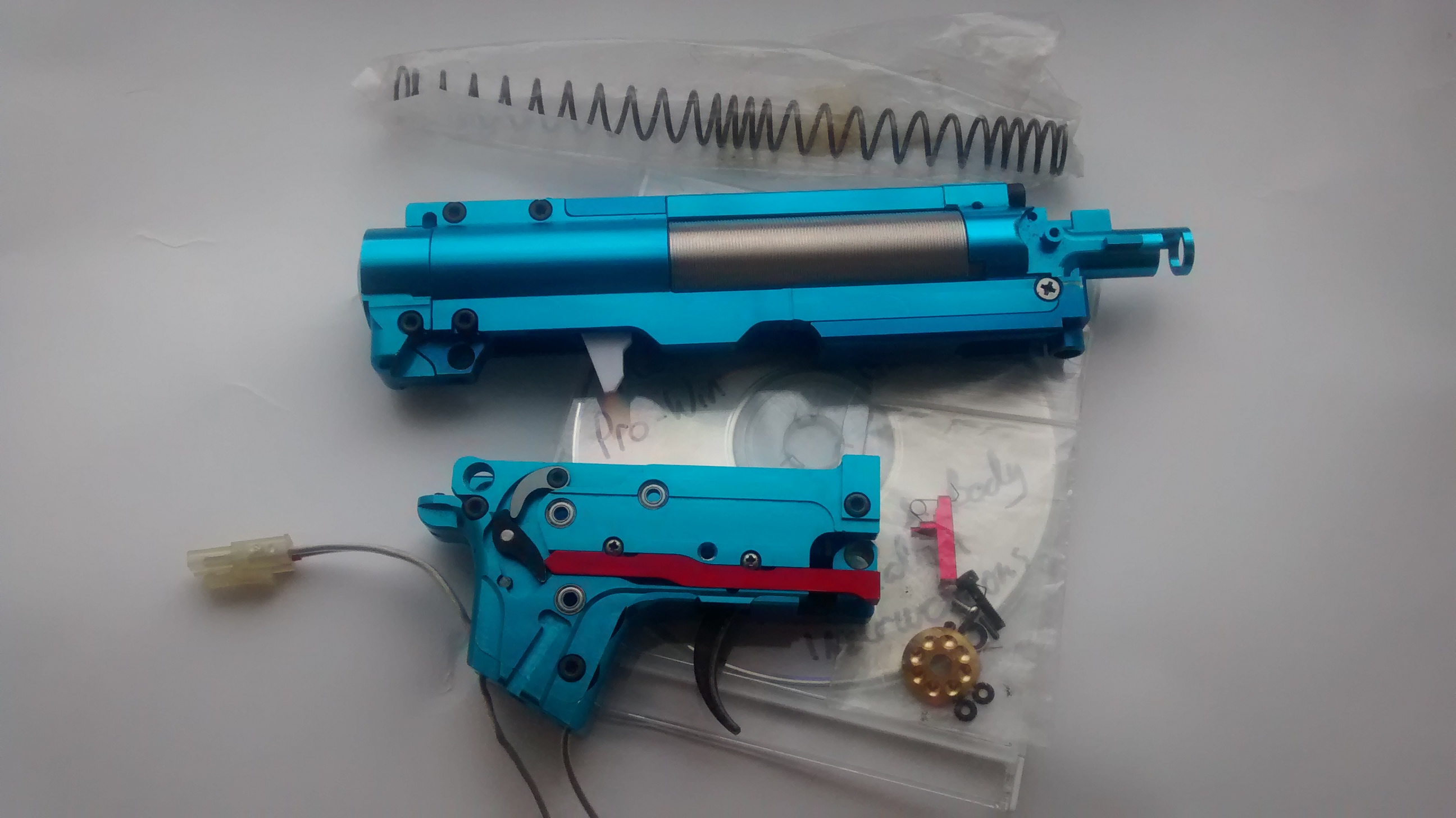 Since the very beginning, ICS was an attractive and affordable solution. Replicas equipped with a two part gearbox were not significantly more expensive than those of the competition built around a standard V2 gearbox. What's more, those replicas had a one-piece HopUp chamber from the get go, equipped with precise adjustment done via a ring rotating around the barrel axis, exactly as in the currently popular "rotary" type chambers. Another distinguishing feature of those replicas (and the characteristic feature of the ICS two part gearboxes) was a functional forward assist used to relieve the main spring tension. After pressing the button, a cam moved the anti-reversal latch from the bevel gear and the piston went into the front position.

The benefits of owning an AR by ICS were obvious. Firstly, the above mentioned possibility of changing the muzzle velocity in just a few seconds by replacing the upper part of the gearbox. I used it many times myself. I had an early ICS AR replica with Olimpic Arms markings and two "upper" gearbox halves - one for outdoor games configured at 450 fps and CQB one configured at 320 fps. I carried the second one in a magazine pouch and exchanged before entering the building at the Pasternik in Cracow.

The second benefit is easier maintenance and possible diagnostics in case of failure. Immediately after the opening of the replica, it was possible to check the state of the nozzle, the tappet plate, the teeth on the piston, the sector and spur gear and the trigger switch contact surfaces. And we are talking about times when no-one manufactured pistons with a full metal teeth and the only mass produced electronic control system (a simple on at that!) was the one added to the tuning set by Systema, designed solely for the Tokyo Marui PSG-1 replica (by the way: by assembling such a set I was able then to look at this technology and some similar setups worked for some time in Cracow at that time).

All these advantages still apply to the contemporary ICS models. In replicas that do not have an EBB (electric blowback) system, the very same mechanism is still being installed as it simply stood the test of time. Of course, budget components are installed in budget replica series, but in more expensive one the factory configurations are slightly modified. It is important to know that all internal parts are still made in an unwritten standard, which allows easy and inexpensive upgrading or replacement. Not without significance is the mechanical durability of the frames themselves, which work for a long time even under a significantly increased load.

The introduction of replicas equipped with an electric blowback  forced some modifications to the existing solution. Hence, both versions of the ICS two part gearboxes (with and without EBB) differ slightly from each other and are not compatible. Fortunately, the difference applies only to the frames themselves, the spring guides, the anti-reversal latches and the safety selector plates. All other parts are interchangeable and comply fully in the standard. Comparison of the upper parts of the gearboxes. At the top version is the one with the electric blowback system which the bottom one does not have. The EBB version has a raised upper part, on which the dummy bolt carrier moves. The EBB version also lacks a notch for the cam of the anti-return latch cooperating with the forward assist. The second difference is the use of the currently fashionable quick spring change system in the EBB equipped replicas. This is done to further facilitate changing the muzzle velocity of a replica as in those made by ICS, this can be done in two ways. On one hand you just replace the upper part of the gearbox and you can do it without using any tools. On the other hand, in a slightly more complicated way, by turning the spring guide by 45 degrees, taking it out and replacing the main spring itself. This functionality is not present in replicas without the electric blowback system (shown on the left). Regardless of which version of the ICS replica you have, with or without an electric blowback, the change of the muzzle velocity is clearly easier than in any other AR "quick-change" system. We take out only one pin, break open the replica and either replace the upper part of the gearbox, or have an immediate access to the spring guide. You do not need to make any troublesome combinations with the buttstock, the stock guide or its crown nut.

I mentioned earlier that the lower parts of the gearbox are also not interchangeable. Seemingly they look identical, but differ in details (EBB version at the top). The first difference is the modification of the lower rear guide plate resulting from the shape of the dedicated safety selector plate. The second is the appearance of a hole of an anti-return latch similar to the standard ones, used by EBB replicas (on the right). The latch looks standard, but has a one slightly longer axis section ending with a spline shank. This is the part that differs from ones used in versions without the electric blowback as in the EBB replicas the spring release system is controlled by the safety selector switch. The benefits of having a two part gearbox are, in my opinion, obvious and can not be overestimated. If someone needs a rapid change of the muzzle velocity in the field then an AR replica by ICS, apart from the more expensive and endemic PTW/WE Katana systems, have virtually no competition. All other AR "quick spring change systems" are of course fully functional and fulfill their role, but the ICS's solution is still the most convenient and fastest. It is also worth noting that the second half gearbox worn in a pouch is almost like having a spare replica with you all the time.