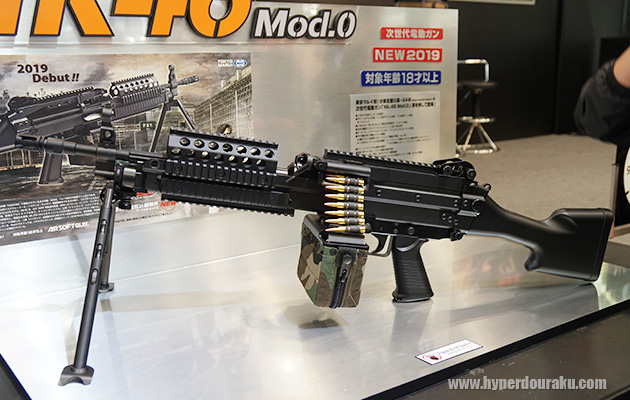 In recent times, critical voices have often been heard about new products from Tokyo Marui. This time, the manufacturer put out a strong hit.
In this article
PAGE 1: Tokyo Marui bets on support - MK46 Mod.0 SAW

During the 5th edition of the Tokyo Marui Festival which took place in Tokyo (Japan) on 17th-18th November, the manufacturer presented its upcoming new products. The most welcomed of those is the MK46 Mod.0, also known as the SAW (Squad Automatic Weapon), announced for 2019. As Hyperdoraku reports, the replica is the new generation of Tokyo Marui guns using the Recoil Shock system. The manufacturer states that the force of the recoil is 600g! The replica is equipped with a full set of aluminum Picatinny rails on the hand guard. For a more comfortable handling of the machine gun, the bottom RIS rails has polymer covers. The bottom part of the hand guard has a dedicated space for a battery. The outer barrel and the upper receiver are made of aluminum. The charging handle is movable. Sights are adjustable. The butt stock is made of polymer. A foldable paratrooper stock is said to be available as an option. The SAW comes in a set with a magazine holding 1000 BBs and a bipod. The box magazine is powered by four AAA batteries. The set also comes with a dummy ammunition belt. It is made of aluminum and according to the reports, during shooting the belt pleasantly bounces and "clatters". The gearbox was designed especially for this replica. The high speed motor is placed in the pistol grip. The replica is equipped with a MOSFET. When the ammo depleats, the replica will stop shooting (this function can be turned off). To shoot again the replica must be reloaded. The replica comes with a 8.4V NiMh AK type battery. It weighs 6.6 kg. Its overall length is 928mm.