Author: , Redakcja: Regdorn
This article comes from an older version of the portal and its display (especially images) may deviate from current standards.

MP5 PDW is one of the most handy airsoft replicas. Small in size, practical front grip, solid and well designed stock - easy to fold. Good replica for CQB and as well for rough terrain scouts. 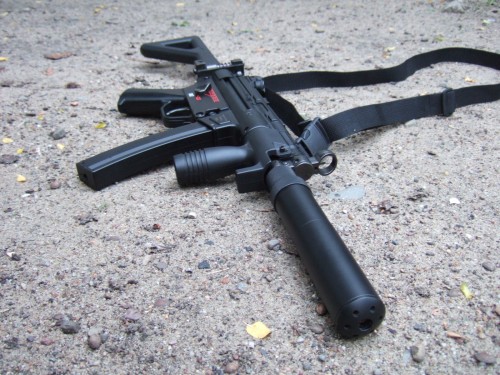 I would not rather see it as a backup gun for a sniper, though it is frequently used like that.

What's in the box

Because MP5 PDW is a small replica I was surprised with the size of the box. SMG lies in the box with unfolded stock. You get it with two mags: low-cap and hi-cap, ramrod, crude sling, battery, slow-charger and BB charger, and some manual.

At the first glance it looks just like Tokyo Marui replica. I had a chance to compare both of them and I was surprised of how well it is copied.

- I have checked the sling just out of curiousity. ZnAl buckle has given in the second time I have used it.

- Fire mode selector is more easy to change its mode than TM one. It is easy to change the fire mode unwillingly, because from one side it is near a thumb and forefinger on the other. At least I did it, and my palm is just avarage.
- Plastic material colour and its texture is same as TM.

- There were no squeeky sounds, though it has some loosy parts. First thing to do is to screw up loosy places (to meet the demand you get smal six side key)

- Plastic flash hider - it looks OK, though it is loosy, which makes it total failure. Nevertheless same kind of joke is in TM replica.

- Rearsight is plastic but it doesn't look that bad. It is not thoroughly exposed to any damage, so I would not treat that as complete disadvantage. It managed to stay in one piece.

- Metal parts all zinc-aluminium, are somehow oxidised, but it is not fully mat and in contradiction to Marui one, Galaxy has sort of auric shine, which is not comforting. Metal parts are also pretty vulnerable to humidity. By accident, I have left it exposed to humidity and over night all metal parts were covered with some white tarnish. 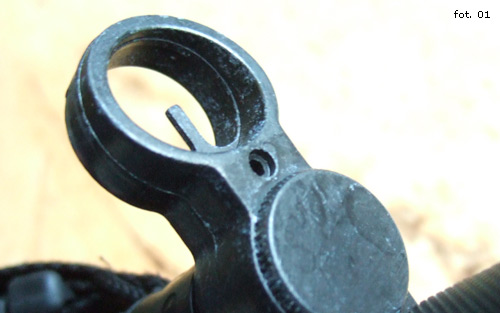 - Instantly, at the very beginning you would notice some cracks on the body, were pins of stock mounitng are located. Partially it is due to thin plastic, partially due to little space between the edge of the body and pins, and the last thanks to loosy parts.

- Stock is more vulnerable and lighter than the TM one. Both of its parts are not well kept together and are empty inside - as far as I remember parts in TM, are solid and fused together, regarding Galaxy - they are empty inside and just glued together.

Maybe for some, it might be the advantage - handyman with soldering tool might try to get much more powerful battery inside (it would fit more cells than body) which would also make dummy reload handle movable. You may find some tips on that matter on  Arnie's Airsoft.

I have damaged plastic parts at hinge, but it might be my fault - couple of times I tried to unfold the stock by force without lifting it up. Wrapping it with black tape helped to keep it in one piece. Below you may see, what is the proper way to unfold the stock. 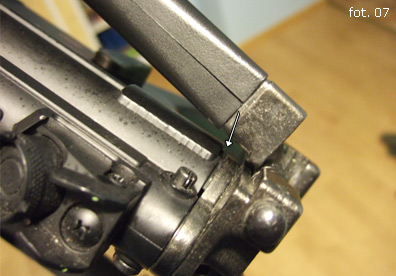 - After couple of months, parts of the body started to branch off, right next to magazine socket. Wrapping it up again.

- Hopup. No failures here. I have heard that in most of the Chinese replicas hop-up rubber is just worthless. This time it worked fine, even though it was set at almost the lowest setting.

Standard battery is just useless. Fully charged, it barely managed to give power to make a single shot. At first I thought it was just some malfunction of fire mode selector, until I have connected other battery. Standard battery gives rate of fire comparable with world war first Maxim, absolutely unacceptable in submachine gun. It drained down quickly as well. Keeping that in mind, that most of "cheap replicas", would follow this problem, it might be neccessary to buy another battery along with the replica.

Battery is installed after removing stock. It might be seen as inconvenience, but in theory you might need to put it there only once - to charge it, you just have to remove front grip, where a plug is located. Battery sits still - no irritating bouncing. It might also help when there is a need to connect additional outer battery.

To remove the battery, pull the stock pins, then push it out by dummy reload handle.

Unfortunately, when I first get the replica, it was difficult to put battery inside. I have realised it is due to bent gearbox plate. Supposingly it was bent by a shop serviceman, when G.5 was checked before shipping.

It wouldn't be that big deal, but when the battery fits that tightly - it just matters. I had to take replica apart, to get to gearbox and hammer this plate. Taking G.5 PDW apart is a serious hassle. I was not that far from smashing it just from anger. I would give you an advice: you are not familiar with disassembling AEGs, better ask somebody else to do it.
Fuse is a misunderstanding. It would just disconnect, break apart - it requires your attention frequently. Its cover, would slide down, whenever you take off front handle. After some time fuse stopped to conduct, and it broke, when I tried to get it back to work. Since then, I did not use fuse at all, I just connected the wires live. 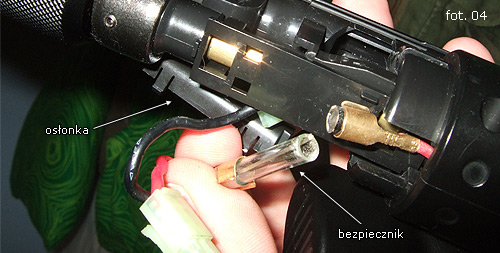 Wires are attached to body with adhesive tape. You may call it botch up, but I did not care that much.

You get one small, not terribly lightweight plastic low-cap, which I had not used much and standard, metal mat dark grey hi-cap. It looks good. At first it just did not roll BBs into tube, rack was moving loose, immidiately I had one small ring in my hands. It was a cotter of a screw, which was supposed to keep it safe. 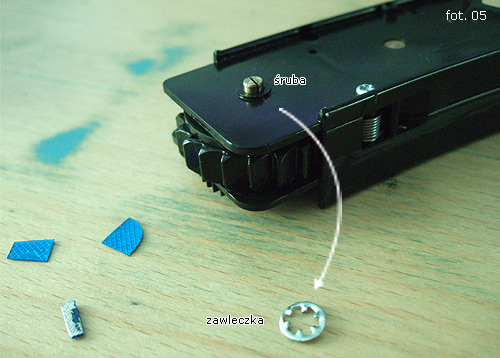 Thanks to our forum I know, that other people had same problems. I fixed it. Dismantle the mag (you just pull the pins, easy), I put the cotter back on place, then I put piece of plastic with a dot of a glue, to make it stay there. 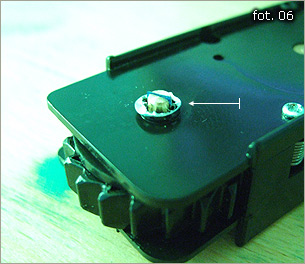 After such a "do-it-yourself", it worked fine.

After a couple of months of using it, BBs cover flap fell off. What did I do? Even more wrapping tape.

Since the very beginning I had a plan to get my PDW fitted with longer barrel, hidden in the silencer. I have bought trendy Hurricane silencer, which was equipped with left-hand and right-hand thread, and MP5 dedicated adapter. First surprise: outer barrel cover thread does not match silencer thread! Diameter of outer barrel cover is much lower than silencer itself. Whereas MP5 adapter was way to small. 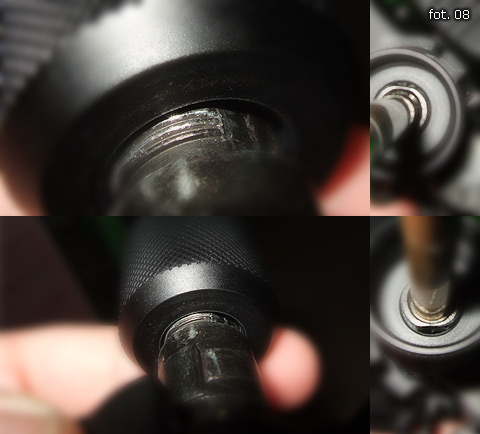 Silencer is brand, and cross-checked in other replicas. I must be Galaxy failure here.

What is more, thread on the ZnAl outer barel cover was immediately useless, after a few attempts to mount it with the adapter. What is worth mentioning some of the forum users, claim they did not meet any problems - their silencers fitted well. Maybe it was only me who had defective piece.

I replaced standard barrel with standard AUG, with some lenght adjustments.

Shortly after realising what is battery about, I have bought G&P 9.6V eight cell stick battery. Not only I had to cut in dummy reload slide, but as well drain replica's body, right next to the slide. I removed ZnAl muzzle sight and outer barrel cover. Draining cause yet another crack in plastic body.

When new battery was finally on place, I used double ingredient glue on cracks near stock. I had no intention to take it apart again. After it was glued, stock seat was stable as it was welded.

About 45 meteres. Before it was fitted with barrel it was not shot too much. In my opinion, barrel change did not alter distance visibly. Maybe at maximum - 5 meters. Accuracy was really not bad. There was no urgent need to increase power. It is important notice especially for new players - it is not neccessary to go for upgraded replica at the very beginning. First get some experience. Power would not give more accuracy - there are number of other factors on that one. Shop claims, that G.5 PDW has 320 fps. Now I am sure, it was shooting better, with less spread than SCAR Boyi of mine, with 400fps.

As soon as I started to use brand battery, RoF increased to the level which in my opinion is OK as for SMG. There are faster replicas, though I never digged to have pocket minigun :) G.5 allows to quickly shoot with short series.

My G.5 PDW was purchased on 2007 autumn, but until 2008 spring, I had a chance to test it, just a couple of times. Since then, every Saturday, I have sprayed out couple of hi-caps.

It died in October, during epic defence of the hill. I have never shot that much, maybe that the reason why it died. In about 10 minutes I have shot four mid-caps, two hi-caps. Then there was some short circuit, and replica kept shooting until the battery died. I had to unplug it, because it was over-heating.

I had no will to fight with cracked&glued body, so I smashed it and sold some parts to a friend.

He put it into other MP5 body and he was surprised with accuracy and low spread. He started to use it as CQB, ended using it as primary weapon.

Even though there were failures, I liked mine MP5 PDW. It was very handy, with convenient stock. Unfolded, comfy SMG, when folded, handy compact spray. I would say, that quickly foldable stock would be a help in every gun. Inner barrel hidden in silencer, has given some look and improved accuracy. Short front grip is handy and it would not make your moves in rough terrain limited. Accuracy more than sufficient, with power as much as it's needed to play a game and enter any building. I would not strongly talk into buying this replica, though I would recommend it to people who sneak a lot, crawl or hack through bushes. Lightweight, compact gun, which with unfolded stock is almost close to shooting a carbine - seems designated for scout like tasks.