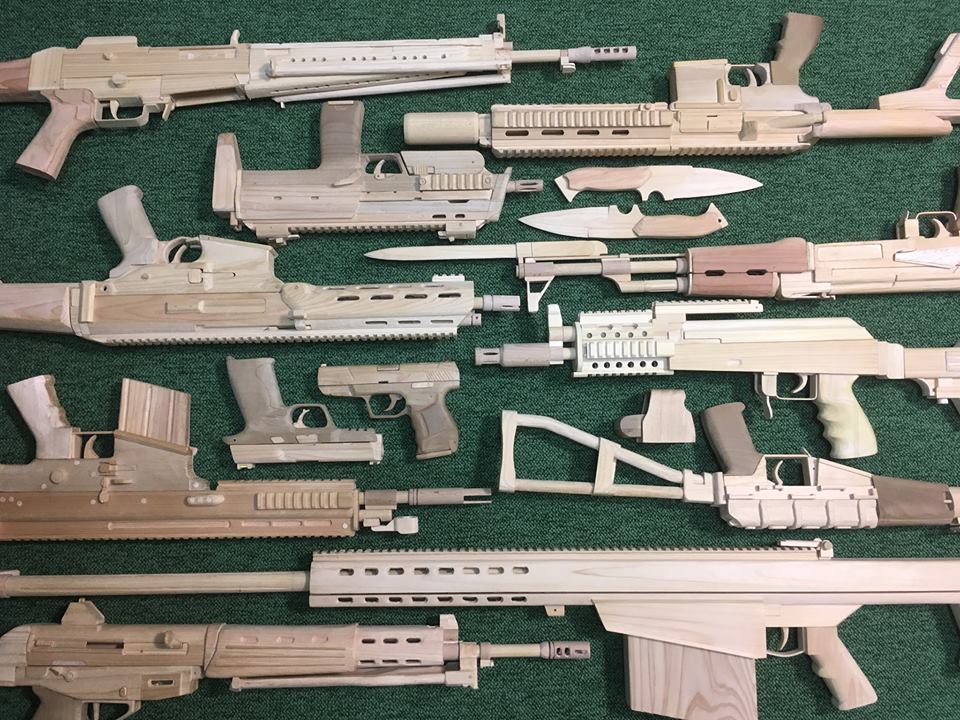 There is a say in Poland- “no matter what you do, somewhere there is a Japanese guy that is doing it better”.
In this article
PAGE 1: Taisei Komatsu: wooden gun replicas

I do not know how many of you are involved in making wooden replica of weapons, but I have a bad news for You - it will be hard to top what has recently been shown to the world by Taisei Komatsu.

I had an interesting online conversation with this guy, otherwise widely known in some circles thanks to the photos of the neo-samurai armor posted in social media. This most impressive thing is that Komatsu has just graduated from high school as he is just a teenager. It is difficult to say exactly how old is he though, because he shares very little information about his personal life, but you can safely assume that it is closer to 20 rather then 15 years old.

If you have not heard any information about a Japanese guy who decided that he will be carving wooden models of rifles instead of large robots or spacecraft, I will bring you up to speed.

Although I am not have an outstanding knowledge of materials, the idea of creating a wooden, detailed replica of weapons seems to me quite exotic and somewhat ambitious. In addition, we are talking here not about a single, fancifully carved board, but about a replica that can be stripped into its individual parts and one that has such details as removable pins, a folding stock, a removable front grip or even internal moving parts!

Still not impressed? What would you say about the fact that a magazine from a real firearm attached to such a wooden replica? Of course, Komatsu also makes its own magazines, made of wooden, in which the real rounds can be loaded. Well, compatibility with the original seems to be a very good indicator of the quality of the work.

To make it even more interesting, to create his toys the youngster uses information found in books, photos on the Internet and and other publicly available sources. A regular STANAG magazine is used to check the proportions.

Whoever you are and whatever you do, you have to admit that this is impressive. 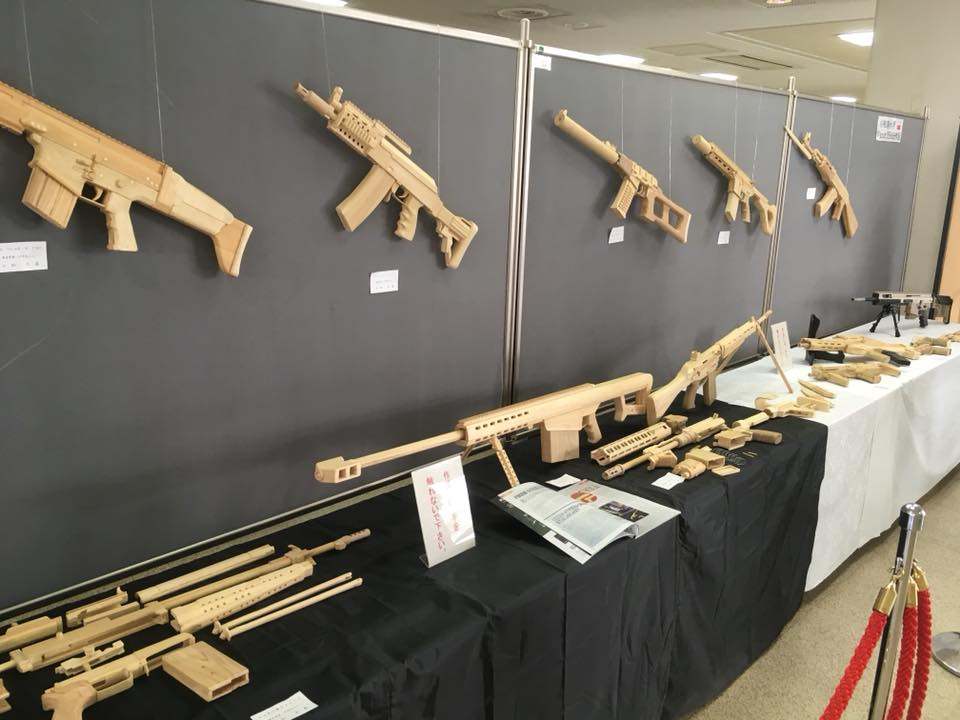 You may be surprised that in the 21st century, while living in one of the most technologically advanced countries in the world, Komatsu uses wood. The reason is pragmatic, the material is relatively cheap, widely available, easy to process and you do not need any specialist tools to work with it. 3D printers are more fun, for sure, but an average high school student can not afford such a device. And certainly not one with a workspace big enough to print a replica.

In addition, if you are a dozen or so years old, living in a country where firearms are practically unattainable, you probably would not want to be accused of illegally making them, especially if your parents are serving in the Japan Self-Defense Forces.

The occupation of his parents is the most important reason why Komatsu decided to make weapon replicas, and not, let's say, giant robots from manga and anime. Nevertheless, as he himself claims, he has always been drawn to weapons that is practically inaccessible in Japan. When he was 15 years old, he saw a wooden water pistol and thought that he could make one for himself. And that's how it started, from a simple Walther P99 model. 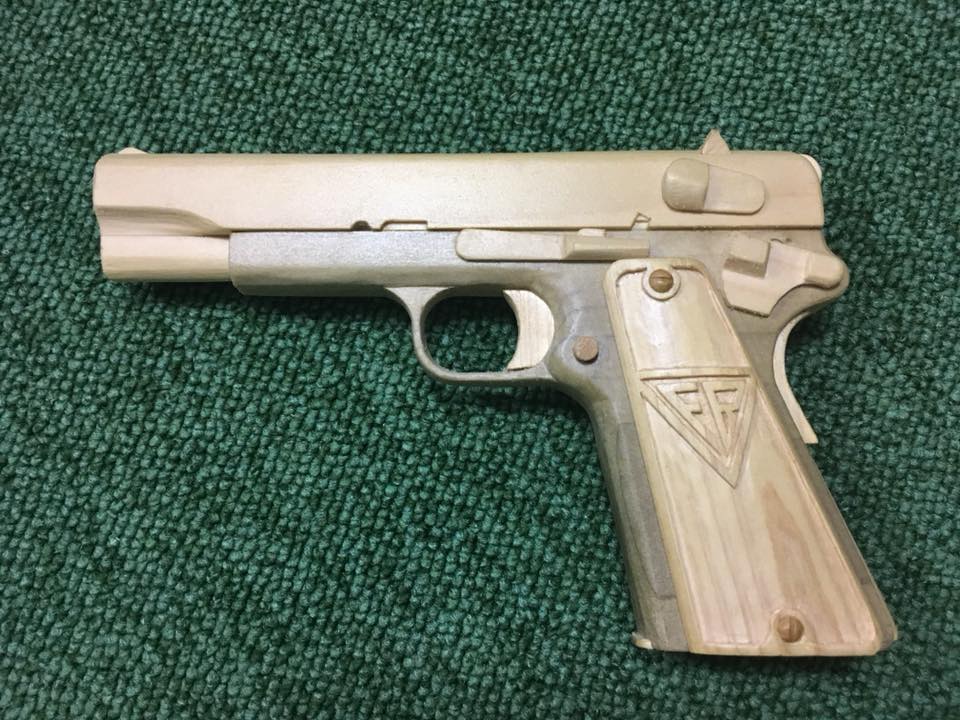 It is hard not to notice that, considering the Polish contribution to the global weapons portfolio, Komatsu's works that bear the logo of "Fabryka Broni" are very numerous, especially taking into account that our western, southern and somewhat eastern neighbors are associated with designs that are known worldwide. Nevertheless, both the Beryl (and also its shorter version), the MSBS or the VIS have their wooden counterparts. Komatsu says that while foreign designs are great, he likes Polish weapons especially because of their design, the classic AK design refreshed by the creators of the kbk Beryl or the modular design of the GROT kbk are the things he likes best.

Despite the fact that he is doing an increasingly better job with each new replica, he has not yet thought about making profits from his hobby, although, if he is able to do so, he would like to sell his works in the future.

Komatsu himself appeared on his last holiday in Poland at the invitation of Fabryki Broni and SWAT Range training company. Besides the fact that he had the opportunity to compare the stopping power his toys with real guns, it surprised him how nice and helpful Poles are, and the country itself is clean and safe. He admitted that he felt as comfortable in Poland as in Japan. His impressions are so positive that he will gladly come again.

For someone who has created a one of a kind thing, it may seem a little strange that Taisei has never tried airsoft, but as he claims, he just can not afford his own equipment. The armor he created was not well suited for hiding in the forest, and anyway, he had to disassemble it, because it did not fit into the flat. Anyway, he planned to use it only for cosplay.

When asked about plans for the future, he remained enigmatic, focusing on the replicas he plans to construct: a Stechkin automatic pistol, another GROT, a GM6 Lynx, a BREN 2 BR, a PM-63 RAK and a SR-2M. Those plans did not come to fruition yet as he followed his parents footsteps he enlisted into the Japan Self-Defense Forces, but he stated that he would not abandon his hobby and return to it when he get his professional life in order.

It is hard not to be impressed by those masterpieces of a quiet, young Japanese man. If you have several (or several dozen) years at the moment and feel that you would like to change something in your life, Taisei Komatsu is a living example that you must not be afraid of trying completely new things and seemingly strange, unusual combinations. Just think outside of the box, do not try to copy someone and whatever happens, do your thing.