AAP01 - a variation on the Ruger Mk IV pistol 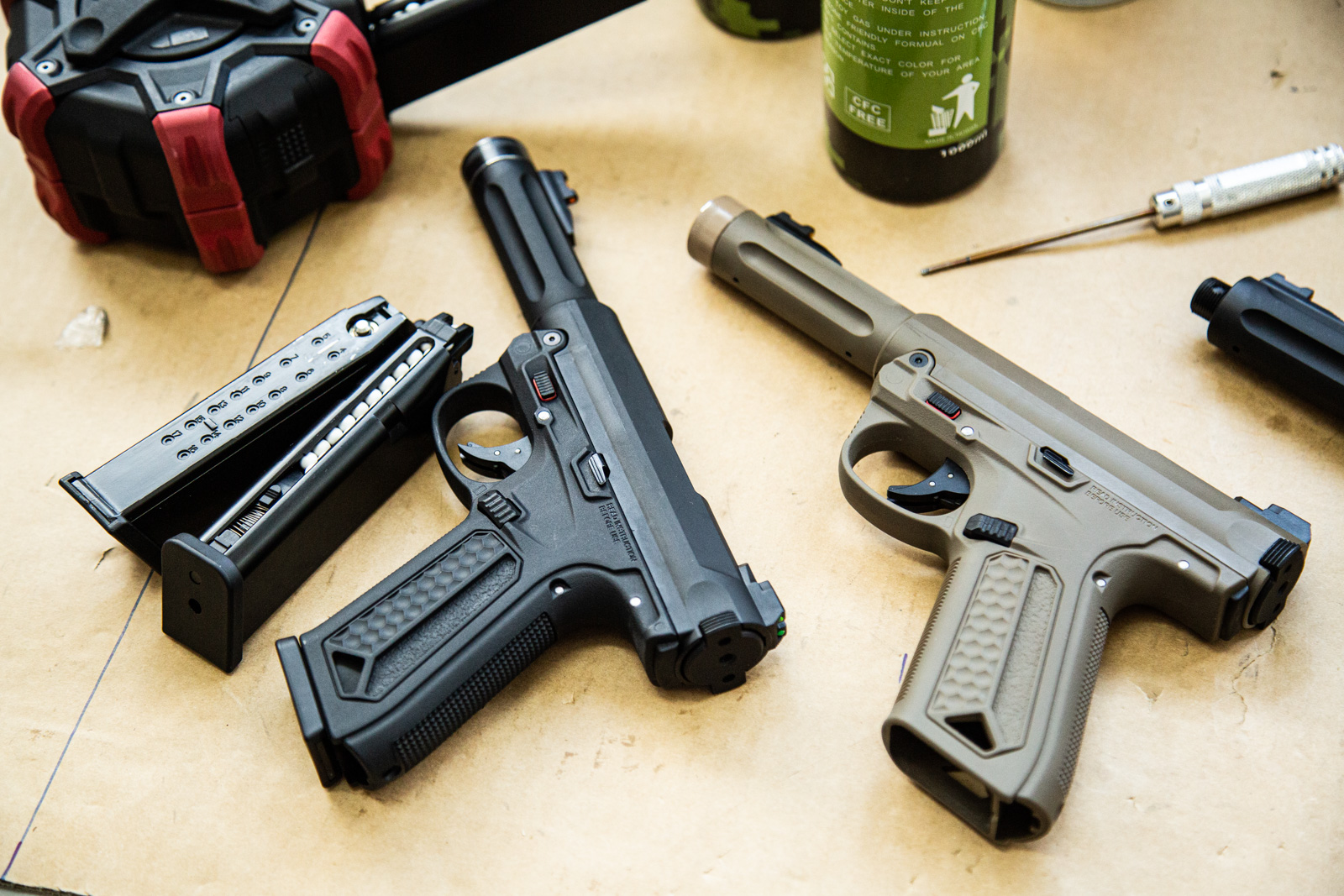 The first gun in the manufacturer's offer is coming next year
In this article
PAGE 1: AAP01 - a variation on the Ruger Mk IV pistol
Gallery
next pageGallery

Action Army's offer so far it mainly consisted of spare/tuning parts and a family of spring-loaded rifles - including the T10 and T11 models we reviewed. This will change in the coming year. According to the company's plans, in March during IWA 2020 in Nuremberg, Action Army will present a new product - the AAP01 pistol modeled after the Rugeer Mk IV. 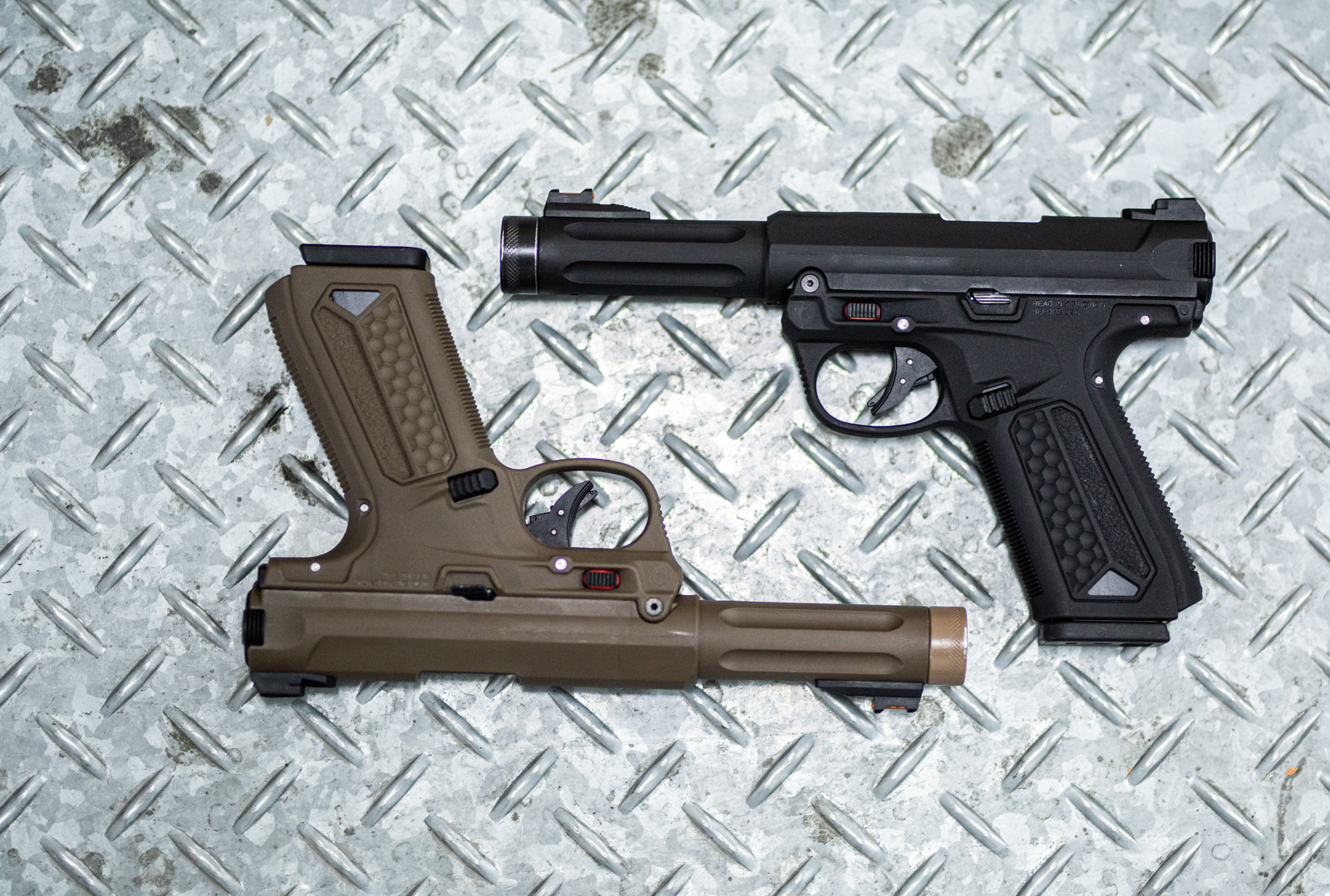 It will be a gas powered replica (Green Gas and CO2) equipped with a blowback. This alone makes it interesting, because the KJW (Mk I and Mk II) products, that have been available for years now, do not have blowback. Why is that interesting? Well, because real Rugers have internal cylindrical internal slide. What you see behind the barrel in KJW replicas is a fixed cover. The only visible part of the slide are the latches used for pulling it back. The Action Army's replica has an identical design principle as the original. The slide is hidden inside the frame and only its rear part is visible. The internal slide of real Ruger pistols is a solution that is very rare (e.g. in the Nambu, a Japanese WWI and WWII Era gun, which was an inspiration for Ruger). In the world of airsoft it is absolutely unique. We do not know about another replica with such a design. This alone makes the AAP01 a must-have for collectors. 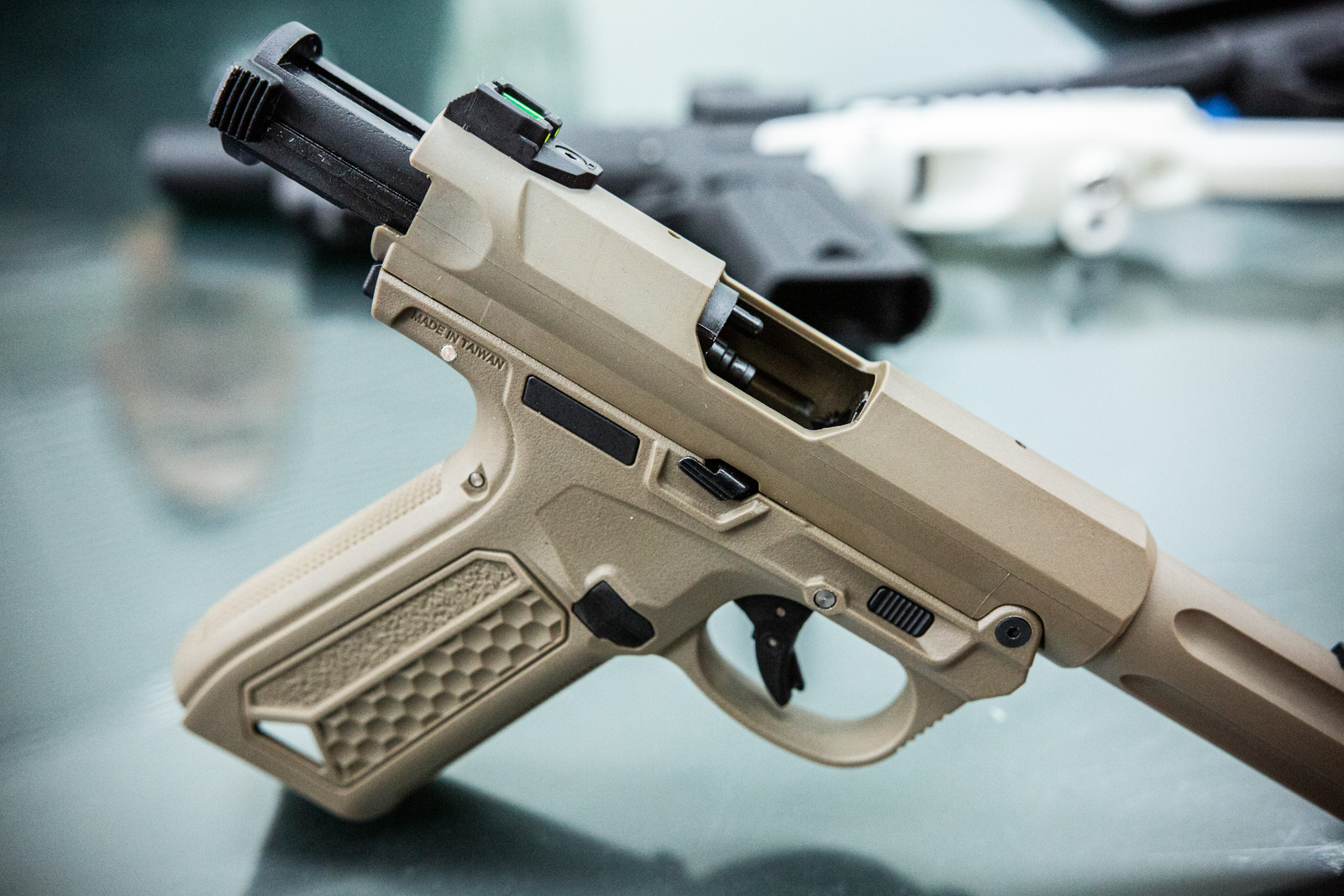 The pistol is not a faithful replica of any of the currently manufactured Ruger models. It uses a polymer frame, which puts it closest to Ruger Mk IV 22/45, which also differs from other models by having a polymer frame. The AAP01's internal parts are compatible with the Glock WE gas powered replicas' system, hence the additional trigger safety. External manipulators, apart from the double-sided slide release visible above, can be moved to the right or left side. 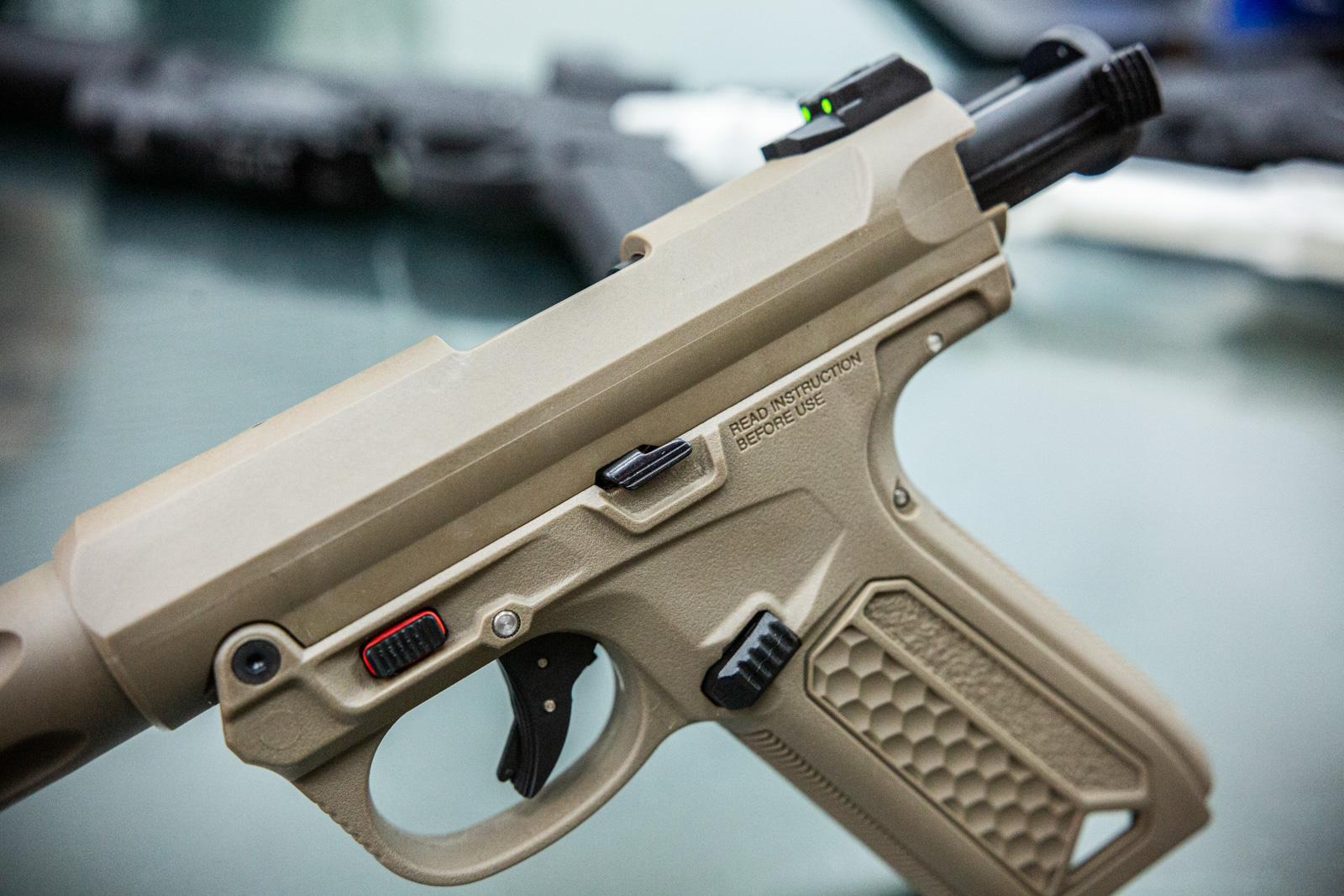 At first glance, there are only 2 deviations from the philosophy of real Rugers. The first is the lack of grip panels (in this respect Ruger is based on Colt's 1911 proven solutions). The second is the possibility of firing in full-auto mode. The switch is hidden underneath the slide. Fortunately, no additional switch was added to the gun frame. 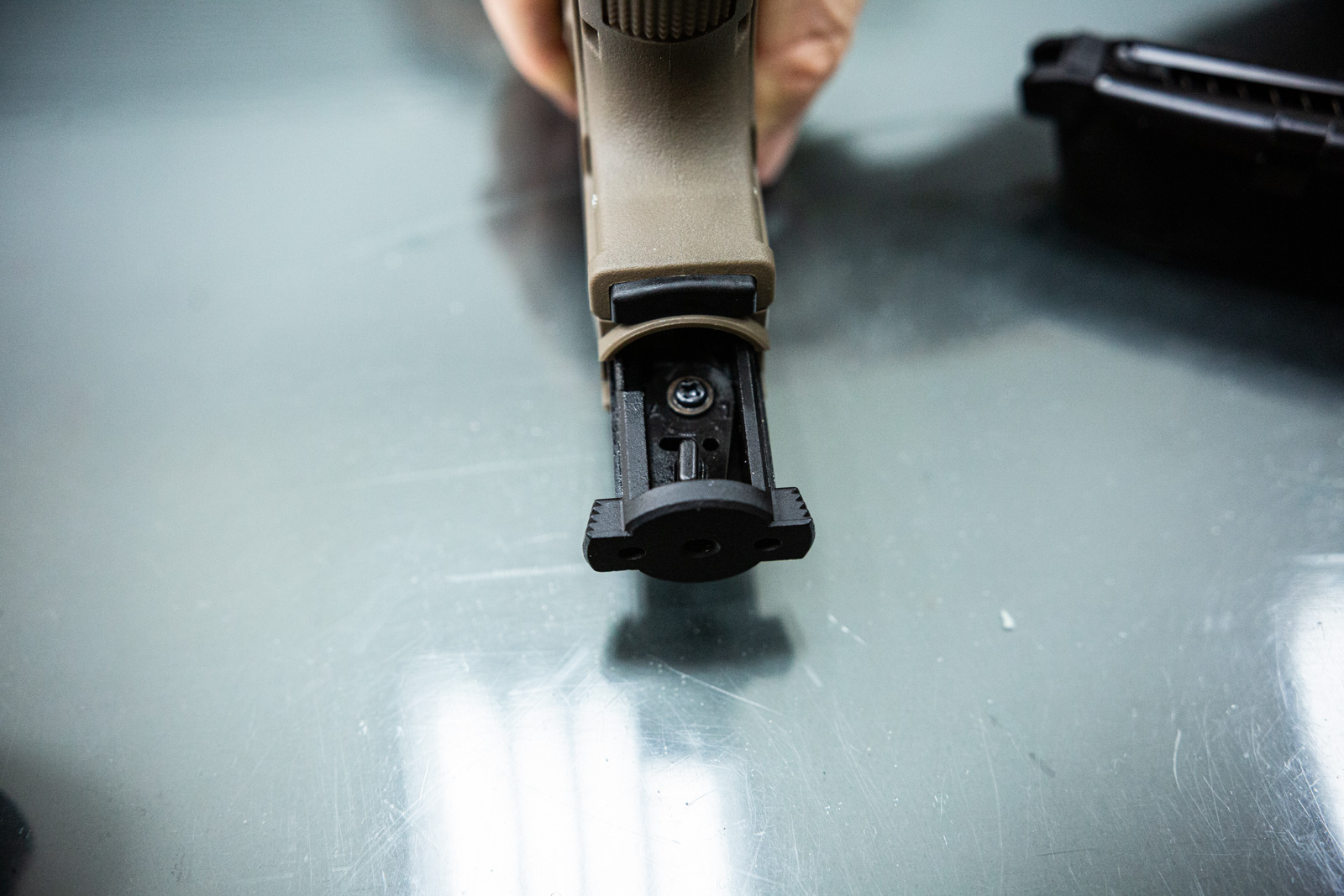 The pistol has fluorescent front and the rear sight can be detached and replaced with a short Picatinny rail. 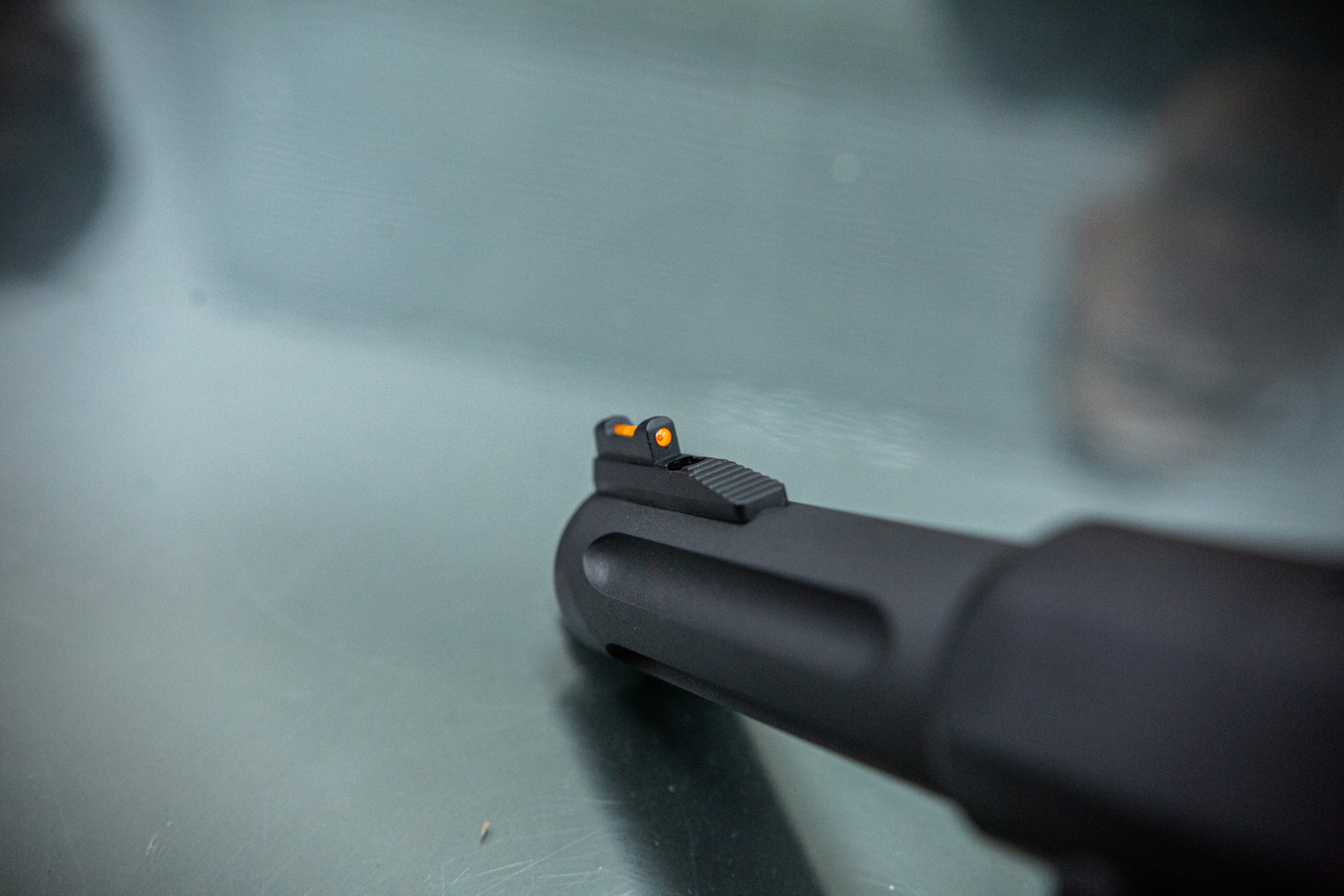 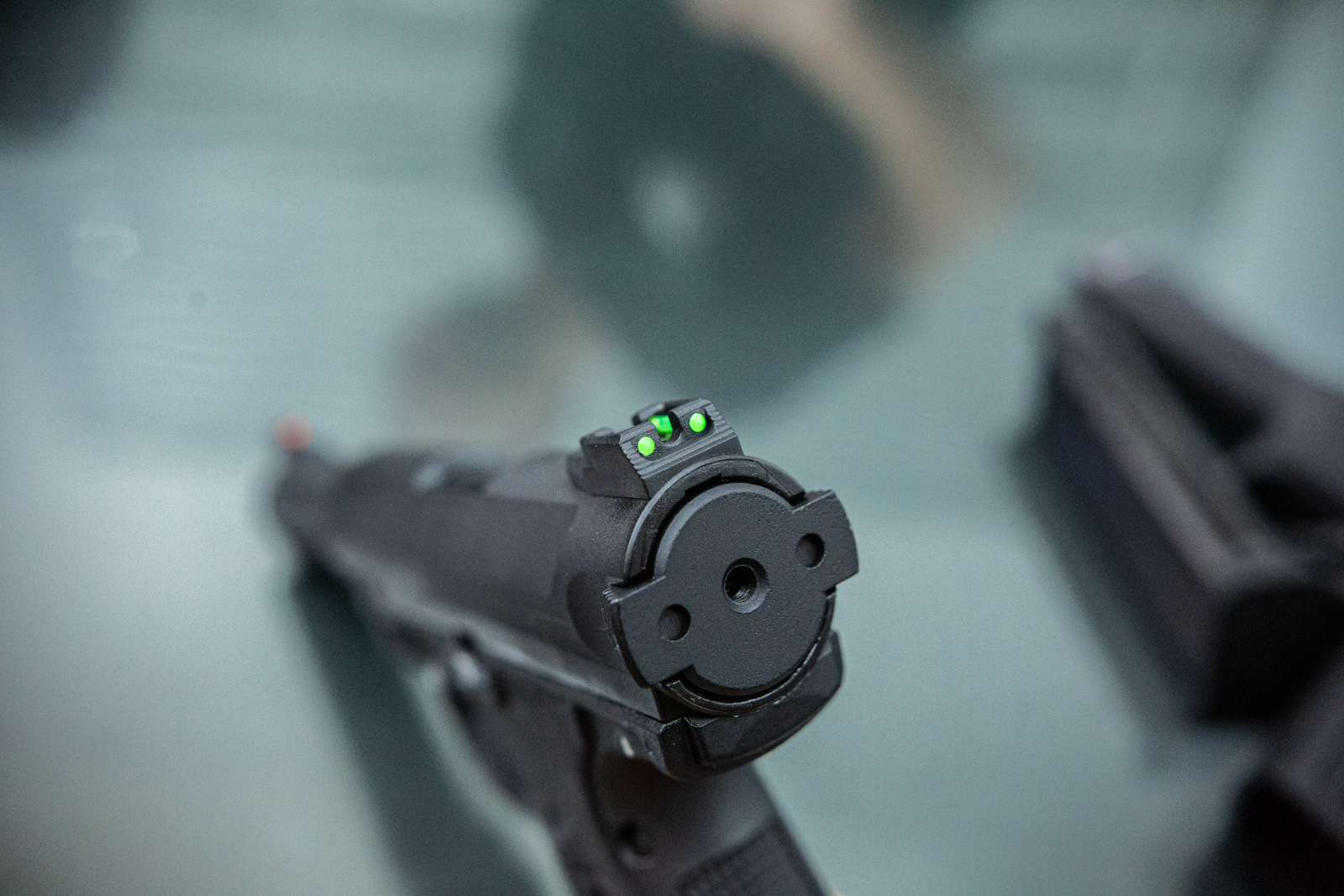 The "heavy" grooved barrel ends with a thread for mounting the silencer. 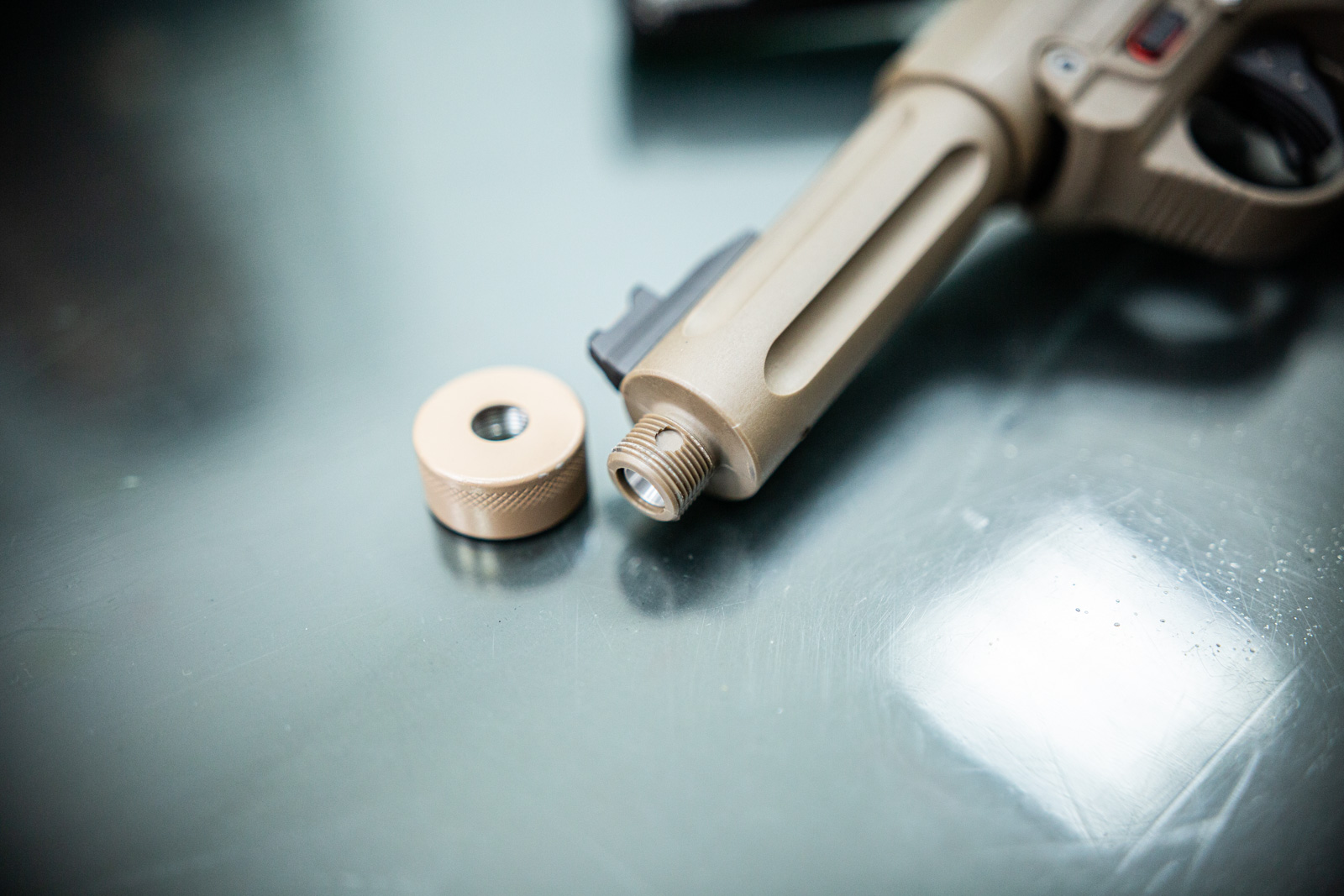 The pistol looks and shoots very nicely. Even Pablik, who is usually skeptical, quickly changed his mind. The difference in the workings of the inner slide relative to traditional designs is noticeable. The muzzle velocity is 330 fps using on Green Gas  and 395 using CO2. During short tests, accuracy and repeatability of shots was very good.

Action Army plans to launch a lot of additional dedicated accessories simultaneously with the gun. In addition to the mounting rails, for example, an enlarged slide charging lever will be available, 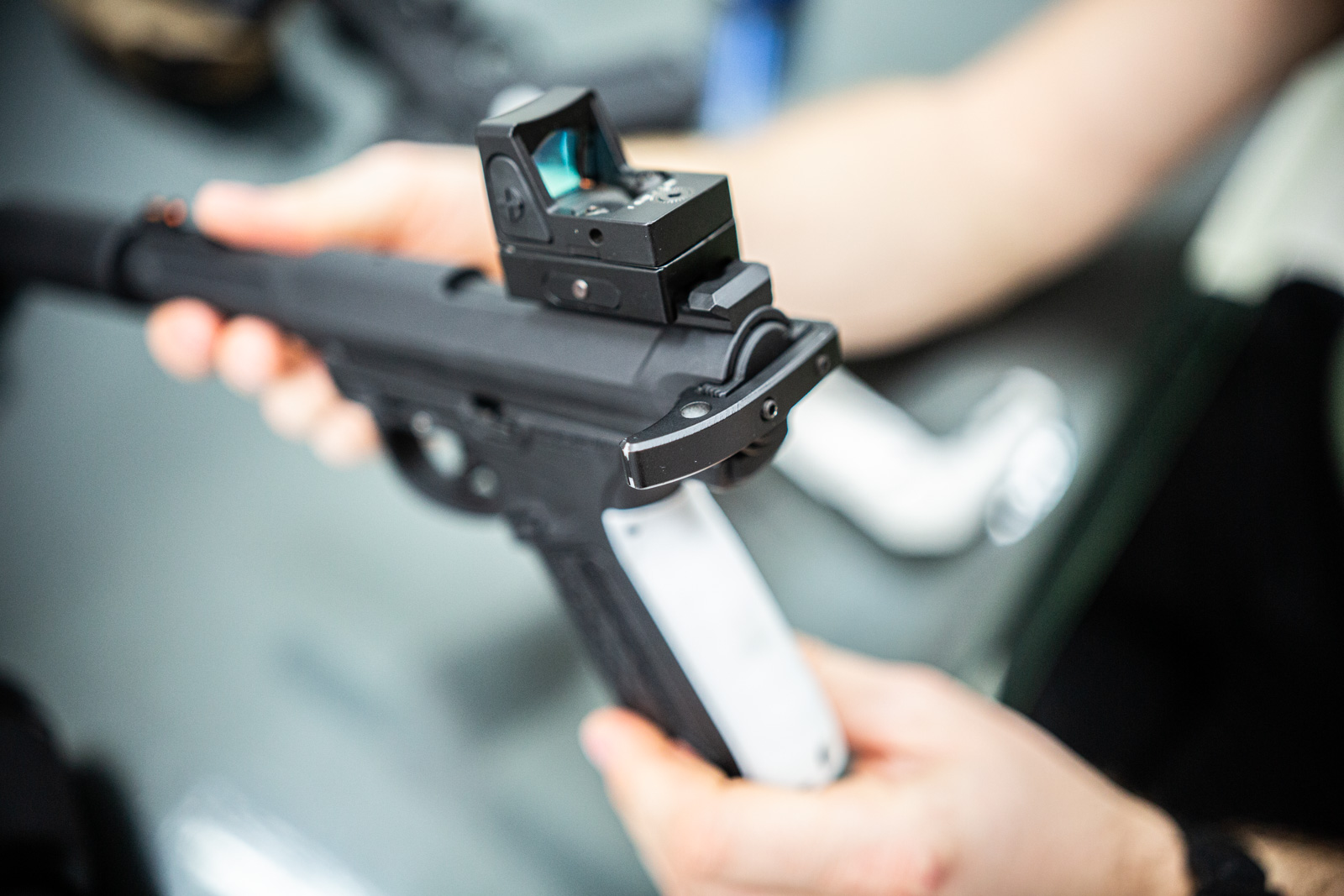 as well as increased capacity magazines 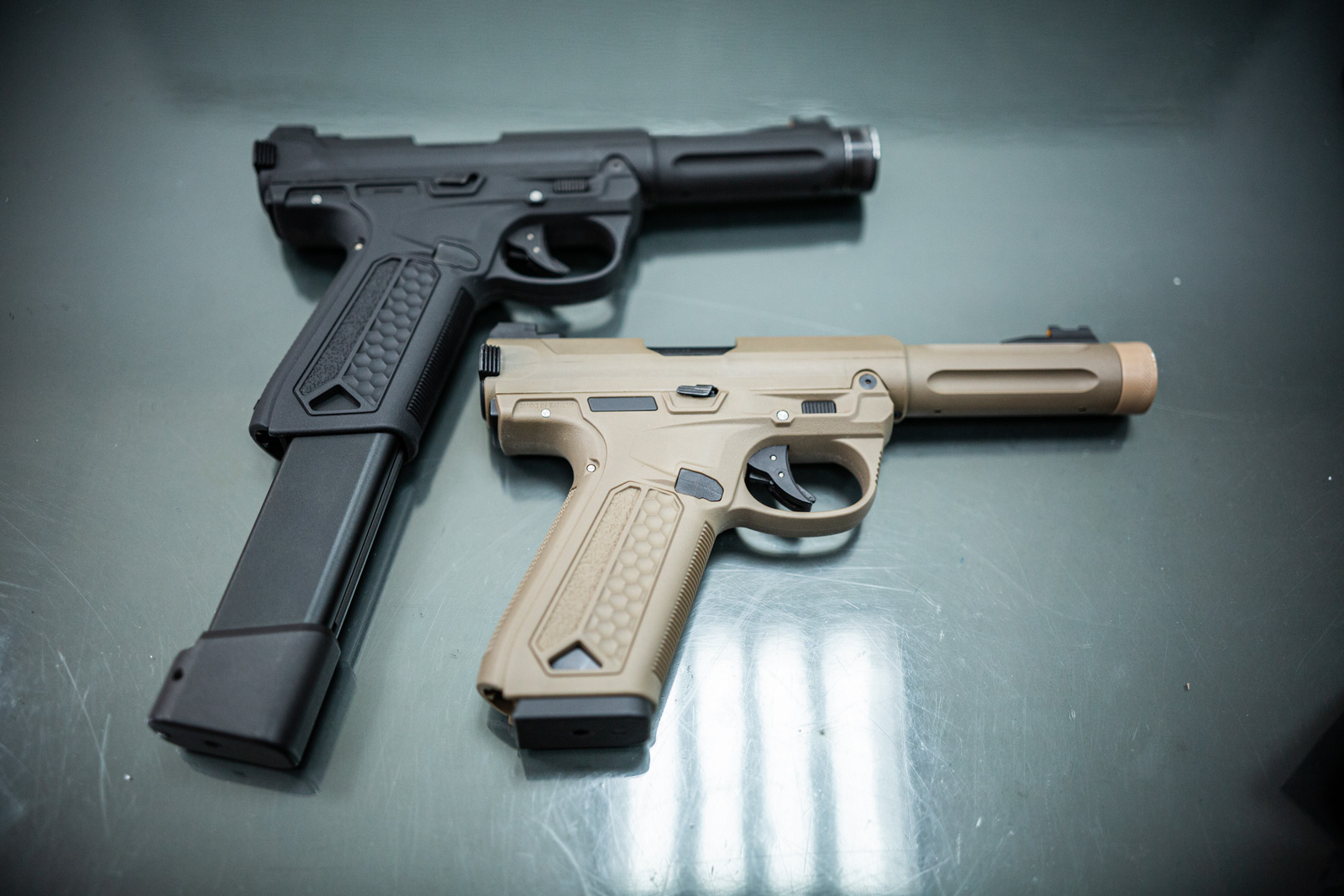 and a removable folding stock. 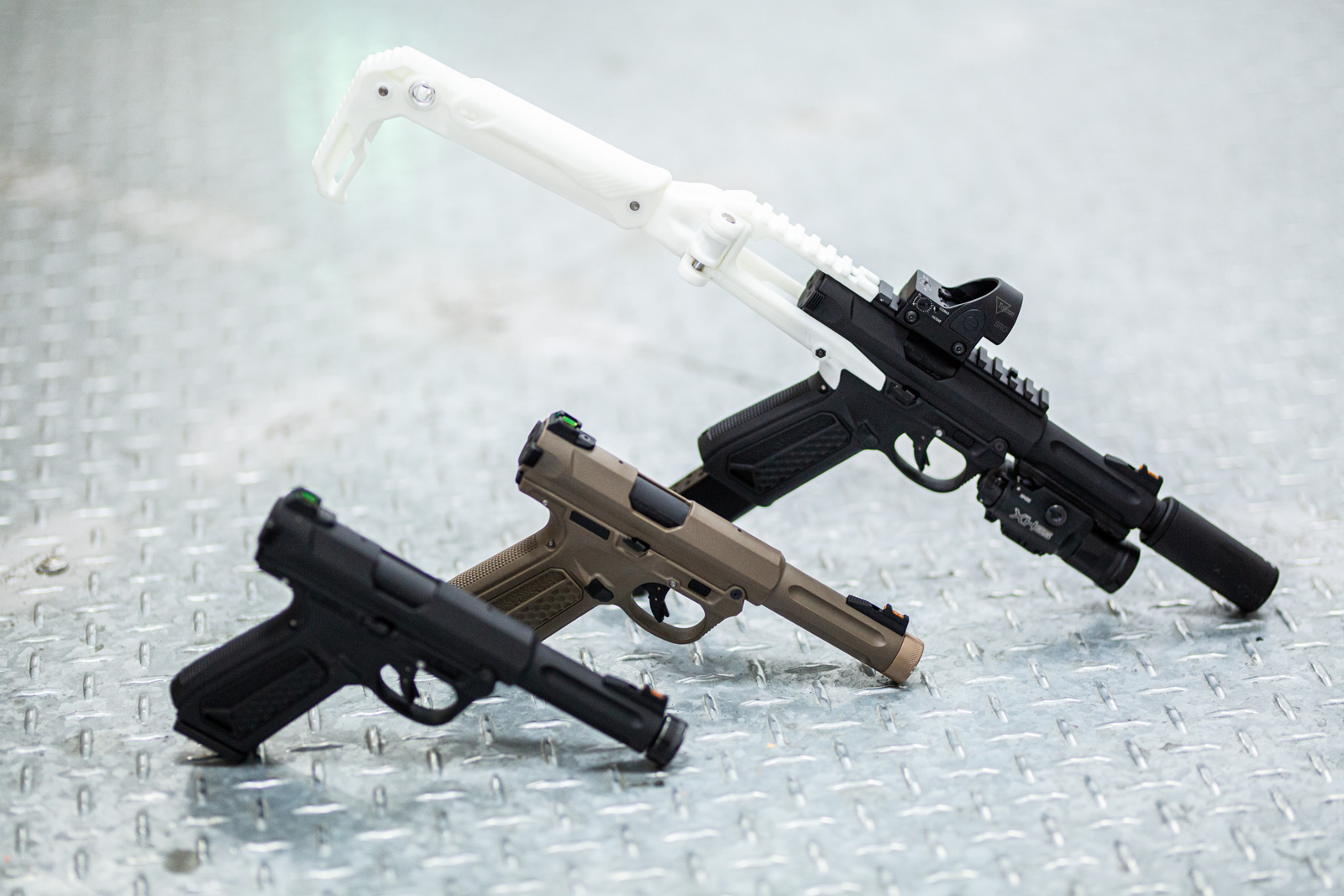 The replica is compatible with the universal Safariland holster. 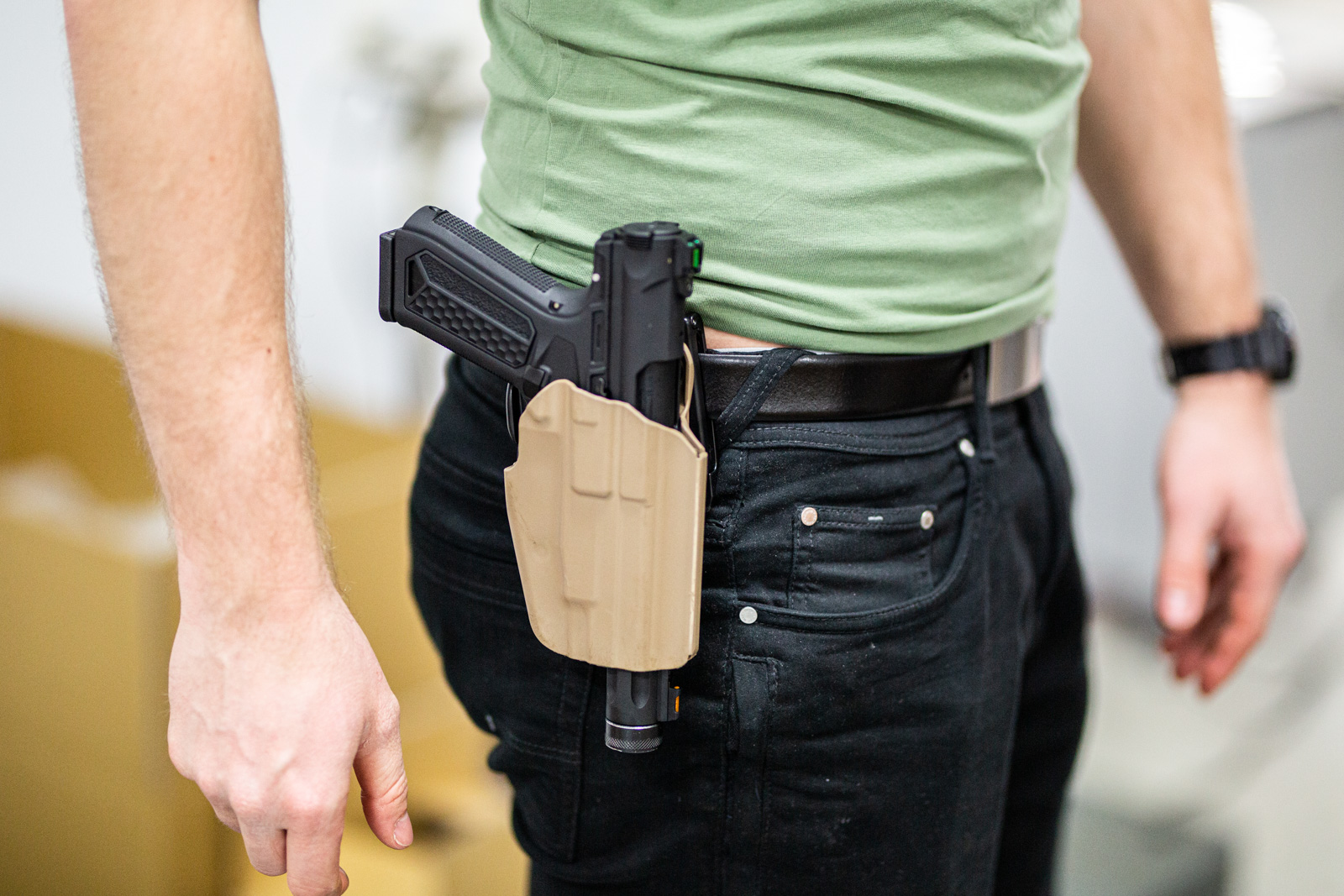 More photos can be found in the gallery below.

In this article
PAGE 1: AAP01 - a variation on the Ruger Mk IV pistol
Gallery
Redakcja:

14.09.2019Czoper
In January 2018, Ezgul has described a new product at that time, the Army Action T10 replica, based on the proven Tokyo Marui...
Inne artykuły