Author: XiE (transl. Roth & Yazard), Redakcja: Regdorn
This article comes from an older version of the portal and its display (especially images) may deviate from current standards.

Just few days ago I received a new product made by ASG in Strike Systems line. This time the product happens to be ‘Tactical Assault’ gloves. I have to say that from the first sight, the gloves seemed a bit familiar to me, but still very interesting. But let’s start from the beginning...

As I said before, the gloves were made under Strike Systems brand. This brand is not well known in Poland, so it is necessary to say few words about it. Strike Systems is a registrated trademark by ActionSportGames A/S. It features a series of products dedicated to airsoft players and connected with a wide category of what we call ‘tactical equipment’. Until today we have a big range of: holsters, combat vests, bags, pouches, slings, backpacks, gunbags and cases. The range of categories is quite wide and each category contains at least few products.

As usual, the first thing that draws attraction is the packaging. In case of Strike Systems gloves, the packaging is quite typical for this kind of products. It is a standard transparent bag, closed by a cardboard stripe. This idea still works well, as we can easily see the product through the packaging without opening it. It’s also easy to present it in the shop. 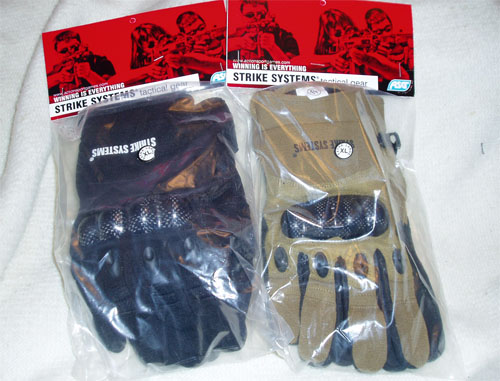 Finally I can say few words about the product itself. In the beginning I have to admit, that it makes a very good impression, even though an equipment specialist will easily find a big similarity to Oakley gloves. In fact they are alike. They differ slightly in craftsmanship, lack of characteristic ‘flatten O” on the wrist, and few details. But let’s put aside the similarities...

As far we have seen a few different models of gloves in Strike System line, but I have to say that after a quick look at previous ones, we come to a statement, that ‘Tactical Assault’ are innovative. Let’s take a lok at some pictures...

Here you have the gloves called in a simple way… ‘Gloves’ 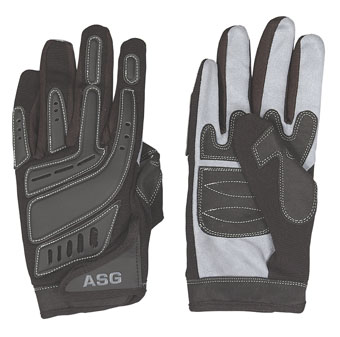 here the ones called ‘Flight model’ 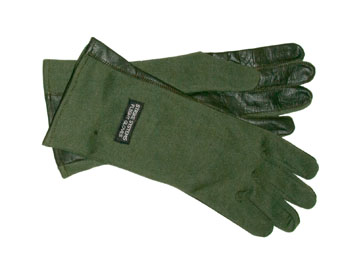 and here the ones made of leather ‘Gloves, leather’ 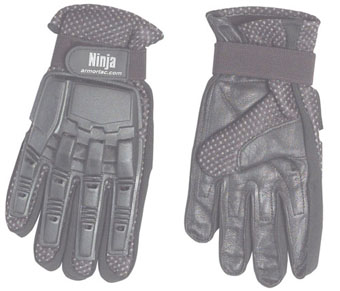 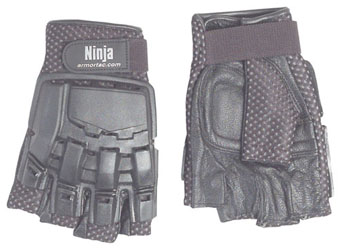 What is new in ‘Tactical Assault’ model? Plenty of things! It is even hard to choose where to start, so I will try to describe all parts one after another. The photos will surely help to point out the details.

The ‘Tactical Assault Gloves’ of ASG were produced of few different materials. It is hard for me to recognise and name all kinds of textiles, but I’m sure about one thing: the designers made a big effort and took care about choosing textiles. The most important was to make the gloves functional but at the end we’ve received good looking ones too. 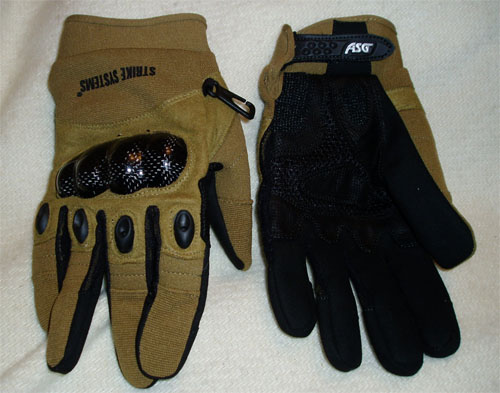 No matter what colour of gloves we choose, the inner side of the glove was made in black. The fingers are covered with a soft black textile similar to suede. The middle part of hand was reinforced with few different layers. All fragments were chosen and cut in a special way to fit your hand when it moves, but also to give a good ventilation of your skin (thus a strange perforated texture of few parts). To finish the inner side I have to say about the mesh inset and sling with velcro that helps us to adjust the glove to the shape of our hand. 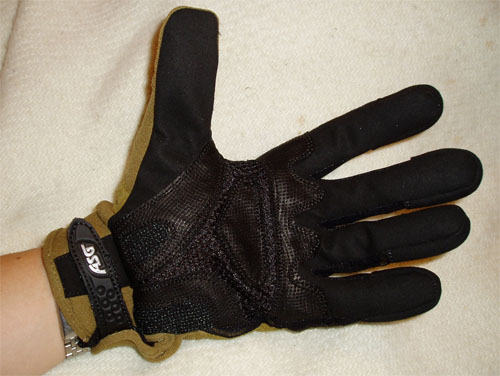 The top part of the glove was made in colour called ‘desert’ (later I will say few words about calling it this way) or the classic black. In both cases the wrist and fingers of the glove were made of two different elastic fabrics, and the middle part of the glove – of suede or a very similar material. If it is just an imitation of the leather, than I have to say that it’s unbelievable – the touch of it is so smooth that I know only one model of gloves more pleasant in touch. On the side of the glove we’ll find an element, which is used to fasten two gloves in a pair. 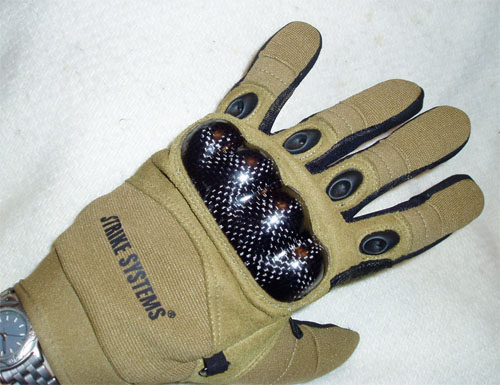 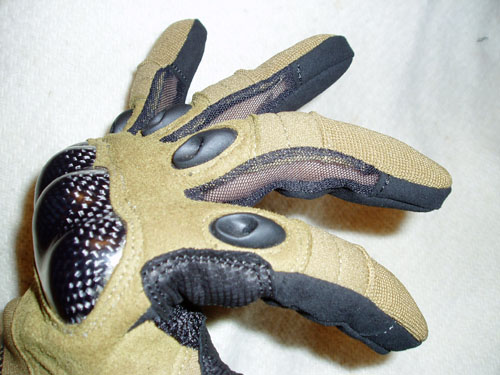 The knuckle parts of the glove are covered with transparent acrylic filled with a black material (probably carbon fiber). It is necessary to mention a nub - difficult to describe – that we’ll find on every finger and which function is quite hard to guess: ventilation, hardening, or maybe it’s just a decoration? No matter what they are – the look is great! 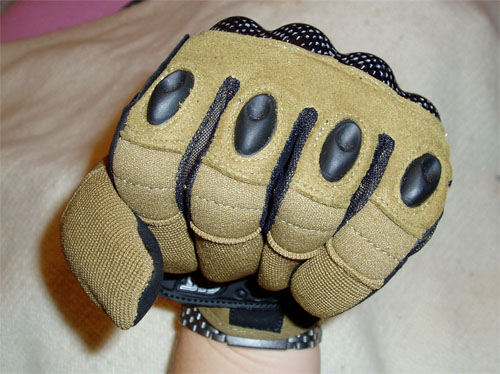 The composition and materials chosen make a good impression. When we put the gloves on we can feel, that they perfectly fit our hand. I have to say, that I am positively surprised, because as I have long fingers I always had a problem with finding proper gloves. Assault gloves seem like they were made just for me, so I’m very curious on how the ones with ‘regular hands’ will evaluate them. However in this whole admiration for Assault Gloves, one thing needs to be mentioned - there’s no reinforcement (no extra layer of material) on the trigger finger. Every experienced A/S player knows that this finger is the one mostly exposed to wearing out. If we use the gloves very often, we feel a bit silly when we have to buy another pair of gloves only due to a small hole on trigger finger. I don’t know yet, how the matter of durability looks with these gloves, but after all – we might cut off the glove trigger finger, when it wears out.

At last let’s take a look at the markings on the gloves… The producer has shown us a big dose of subtleness - which is not common among glove producers... on the top side of the glove, on the wrist, you’ll find a black inscription "Strike System", and at internal part of the glove, there are silver letters “ASG” inscribed on the adjusting stripe. Of course this color will find many opponents, but in my opinion if this bothers you, all you need is a black marker, and the problem disappears.

The gloves are available in two different sizes – L/10 and XL/11 – and in two colours said to be black and desert. As for ‘desert’, I cannot wait to say few words on it. I my opinion this colour can be called in different ways, but not desert! However it is very hard to find a proper name for it. It is definitely not olive, coyote or khaki… I suppose the name ‘dark earth’ is the closest one describing it, but surely there are some ‘girly words’ that would describe it in a better way. Admittedly it is green, but with dirty, close to brown shade.

Talking about the size, I must say that it is interesting that L-size (in other words: size 10) suits me. If the gloves weren’t a bit too wide, they would just be perfect. But I do not feel like having big hands! Still - as I said before - my hands cannot be treated as standard ones, so I guess I’ll just wait for opinions of further users of those gloves.

The Tactical Assault Gloves made a big impression on me and seem to be made quite well. The most important factors are: materials chosen, taking care of the details and gloves quality.Worth mentioning is the usage of several elements reducing the issue of hand overheating and over sweating. Not much could be said right now about the gloves durability. They were just introduced into the market, so they are yet to be recognized by the users. The time will show how they’ll cope in the battlefield. 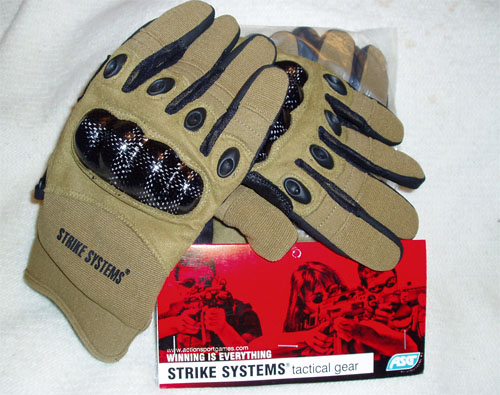 To end with a typical fairytale ‘happy ending’ I’ve got great news for Polish players. Some of you will have a chance to test new gloves described in this article. ASG A/S company sponsored 6 pairs (3 black and 3 desert) for competitions which will take place during Anaconda event run on 13th September near Polish city Lodz.