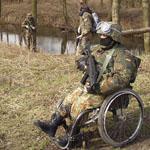 Author: XiE, Redakcja: Regdorn
This article comes from an older version of the portal and its display (especially images) may deviate from current standards.
There are many airsoft teams. For several years, it can be said that it is difficult to even count, let alone remember them. These groups adopt different ideas, goals, and have different tastes with respect to tactics, uniforms or equipment. A few days ago, a rather unusual group approached us, whose basic task is to unite disabled people and enable integration in the airsoft field. In the e-mail message we read: The second founder of the team, Kacper "Kakadz" Kolibowski, has been riding a wheelchair since his birth, but it did not prevent him from realizing his dreams and for some time now he is one of many airsoft players in Poland. We decided to make an interview with him and thanks to it, let the website readers familiarize themselves with this topic. At the moment, the group is small, but we hope that the topic will interest players all of Poland, and that this publication will not only contribute to increasing the ranks of the team, but also to spreading the idea to other regions.

We have divided the questions into three parts. In the first concerns basic information about the group, the group's profile and its ideas. These questions were answered by Sardyna and Kakadz. The second part concerns questions addressed to Kakadz as a special member of the group. Finally, we asked Sardinia about plans for further development and some tips for those interested.

PART ONE - CHARACTERISTIC OF THE GROUP

XiE: Where are you from?
Kakadz i Sardyna: All members of our group come from Włocławek; our team was also created here.
X: The name "ASG 1st Battle Wheelchairs Team" says a lot, but can you explain the idea of a group in a few words?
K and S: Our group was formed to accept, apart from healthy people, also those physically handicapped people, mainly wheelchair users.

X: How many members does your group currently have?
K and S: Currently there are four people in the group (Dominik "Sardyna" Nawlicki, Kacper "Kakadz" Kolibowski, Michał "Mike" Nowak, Maciej "Mac" Nowakowski) plus a fifth one on a trial period (Bartosz "resteler" Szkopek).

X: Beginnings of the group - please describe in a few words how the idea to found a group was spawned?
K and S: We learned about airsoft in 2006 from our friend, then we decided to create a group. In time, it turned into 1st BWT and we decided to take disabled people into our ranks. 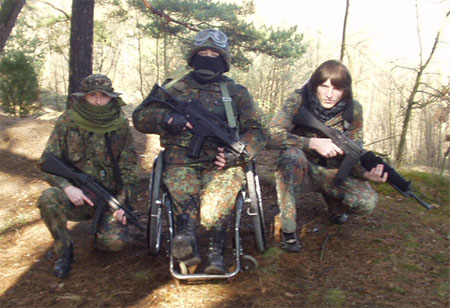 X: One of the first issues that comes to our mind in connection with the difficulties that disabled people may encounter is the unevenness of the area. How does the issue of moving a wheelchair during an airsoft game look like?
K and S: Moving a wheelchair during an airsoft game looks very different, depending on the terrain. On hard and leveled ground, Kakadz has no major problems, but less a favorable terrain for him (rough ground, sand, mud) he is helped by other members of our group.

X: What other difficulties can a disabled person encounter in an airsoft game?
S: It depends mainly on the type and characteristics of a given disability.
K: As already mentioned, for me the basic and in principle the only difficulty may be the terrain - rough ground, mud or slushy sand on the road, as well as fallen trees or branches that can be found on the forest paths, because I often move on them during airsoft games. The area can sometimes be your worst opponent. 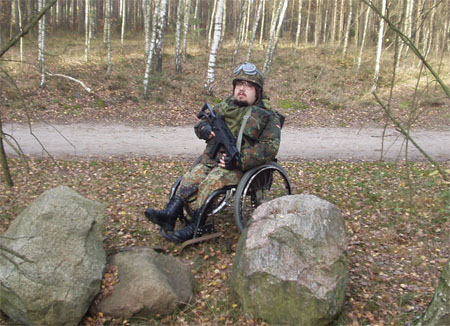 X: The next question is about urbanized areas. Have you thought about any special kind of tactics?
K and S: We are mainly focused on green tactics; due to the lack of buildings in which we could make our airsoft games, we can not focus on anything more.

X: Uniforms, replicas, equipment - in other words, what do you use in a group?
K and S: The basis is the BW Flecktarn uniform. 2 members have Pattern 83 vests, while I and Kakadz use BW gear. Each of us also has a piece of headgear (a BW hat, a BW cap, a replica Kevlar helmet and a contract Kevlar French helmet). When it comes to "weapons", we use JG and CYMY replicas.

X: When choosing your equipment, do you opted for uniformity in the group or do you each choose it individually based on your own taste?
K and S: All members of our group have BW Flecktarn uniforms, while other equipment, such as webbing or replicas, is chosen by each member according to his own preferences.

X: What do your training sessions look like?
K and S: At our training sessions, we mainly practice our tactics - formations, all kinds of hand signals, moving around the forest, and possibly helping Kakadz to a safe position, i.e. when we are shot at, several people quickly help Kacper retreat to the forest to avoid BBs. 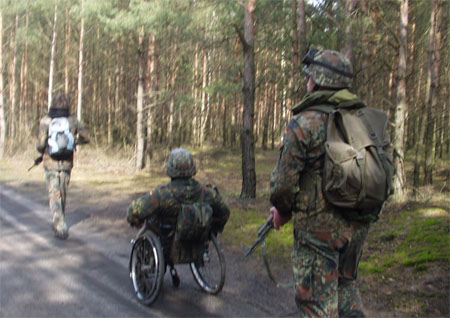 X: ASG 1st BWT and other groups, how does the cooperation work?
K and S: We get numerous invitations for games with other groups and we hope that this year we will be able to visit several teams.

PART TWO - ON THE ROAD TO REALIZE A DREAM

X: What did you expect from airsoft and whether it meet your expectations? Has something positively/negatively surprised you?
K: First of all, I expected a lot of fun and it exceeded my expectations - airsoft is more fun than I thought it would be. Besides, I was positively surprised by the fact that many people support our campaign.

X: As I can see in a few of your photos, sometimes you like to shoot from a prone position. Do you have any preferences regarding a replica or your function in the group?
K: I shoot from the prone position only when I "catapult" (as I like to describe falling over) from the wheelchair. Then there is no time to return to my "tank" and I am forced to fire from the already mentioned position. However, regarding functions in the group, I do not complain. Unfortunately, as a person riding a wheelchair, I do not have too much choice, e.g. it impossible for me to be a sniper. 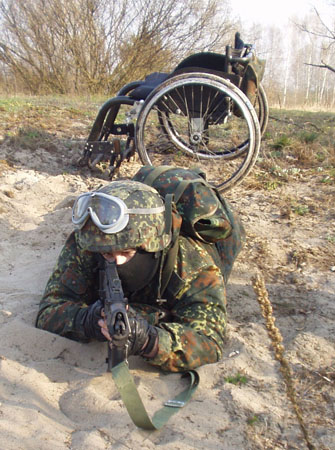 X: I am wondering about hits.Does hitting a wheelchair count like any other hit?
K: Wheels count as legs, if I get hit in them, I am waiting for a medic and I am not taking part in the game during this time.However, the hits at the other parts of the wheelchair counts as my "death". When I hear a BB hitting a metal part I known that I got hit.

X: Camouflage in the field.Have you thought about making a particular ghille or a camouflage suit?
K: No, I am completely satisfied with the BW uniform.I think, however, about a transformation of my wheelchair, namely - I have planned to extend the axles and put on the widest possible tires and re-paint the frame with a matte olive paint. Then I would also attach a canteen to the frame of my wheelchair. 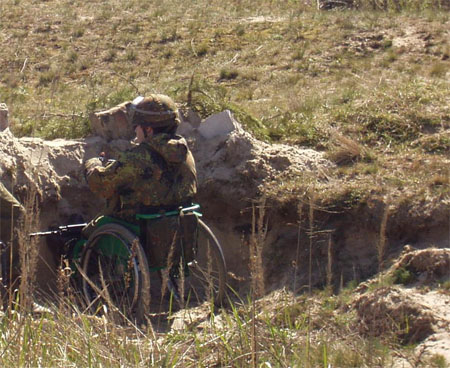 X: What situation will you interpret as overprotection on the part of your colleagues?
K: There are hardly any such situations in our group.

X: What do you value the most in airsoft?
K:  I especially value the amazing atmosphere that this activity has.

X: Do you have other similar hobbies?
K: A similar hobby to airsoft is my interest in all things connected with the military. I also like shooting from real guns.

X: Describe a special adventure from an airsoft game. Something that you remember best.
K: I had a rather funny situation in my memory, from a time when we were just starting to do this. I was in the team, along with a friend, patrolling a designated route and waiting for an attack of our opponents. At one point, Sardyna jumper out of the forest nursery along with another person and they started running toward us, shouting "Hesbollah" as loud as they could. Along with my companion, we immediately began to withdraw, but I hit the front wheel on a protruding root and I was "catapulted" from my wheelchair. I flew a good 1.5 meters in the air and after landing I immediately started firing from a prone position. Unfortunately, the duel was not settled, as no one was able to finish it because of the laughter that overwhelmed my comrade and enemies. How could I shoot helpless enemies? I also started to laugh after a while. 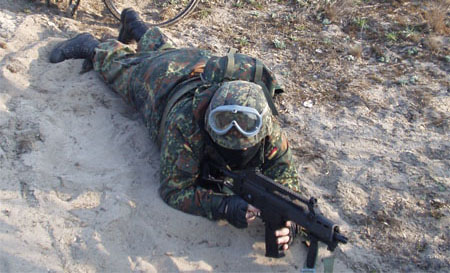 X: Your group is quite young. But you surely have some plans. In which direction do you want to go?
S: First of all, we want to continue to grow and accept new people into our ranks. If only I can get to Gdansk to study, I would like to set up a section of our group there, then we would already be active in two cities.

X: The subject of integration with people on wheelchairs still raises various questions and doubts. What advise could you give to those of us who will play an airsoft game in with disabled people for the first time?
S: First of all I recommend not to treat such people with contempt. Contrary to appearances, people on wheelchairs move perfectly well the forest and only in some situations, such as crossing rough terrain, they need help of their able-bodied colleagues. 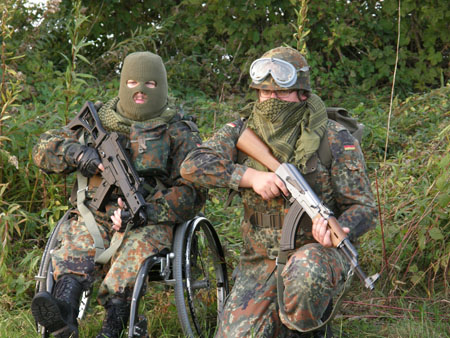 X: And what advice will you give to people with disabilities who want to try airsoft?
S: First of all, do not be afraid that you will not be able to cope with it, because it is full of airsoft players who will be happy to help, which we have already seen ourselves.

X: As you have repeatedly emphasized, the group is open to new members. What criteria must be met to become one of you?
S: The most important issue is the desire to participate in airsoft life. We do not care for people who will come for two training sessions and find out that they do not like it. In addition, we require a BW uniform, eye protection and some airsoft "weapon". Age is also important, as we only accept people over 16 years of age. The person who comes to us for a trial period has 3 months to get the basic equipment. In addition to the members, there are already a large number of airsoft players supporting our campaign.

X: Last question. It's possible that after reading the interview someone will want to join your group or ask additional questions. How can they contact you?
S: Probably the most convenient way to contact me is by email: dominik.nawlicki@wp.pl 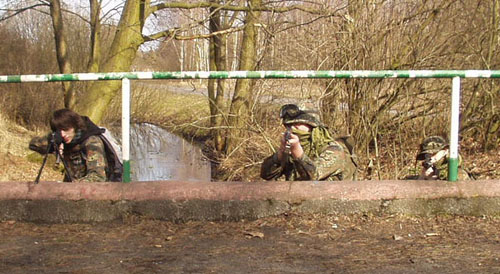