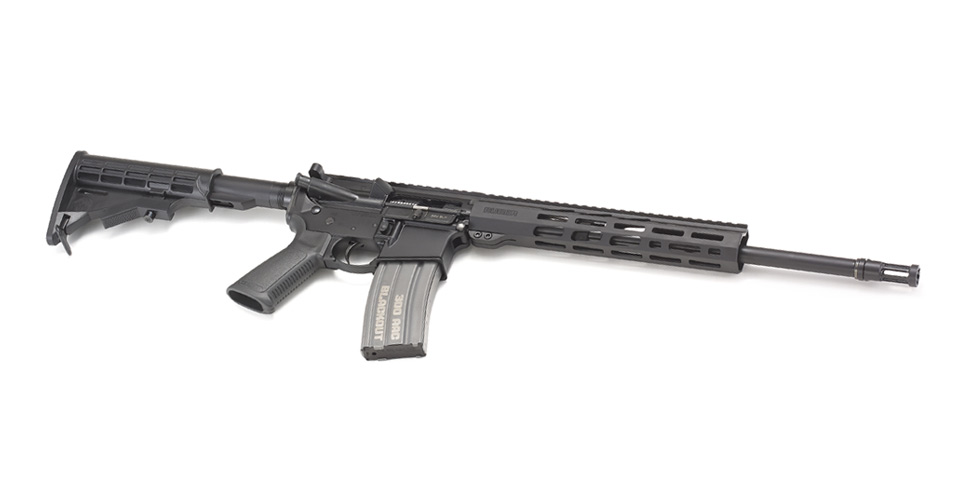 The first Ruger AR-665 chambered for the .300 Blackout round

The AR-556 is a variety of AR-15 in a fairly standard configuration, considering current trends. The carbine is equipped with a popular polymer stock with a sling swivel, mounted on a 6-position guide, which also acts as a housing for the return mechanism.

The pistol grip is similar to the A2 model used in M4/M16 family carbines, but it has been deprived of its characteristic front nub. The upper and lower receiver has not been modified in any way, except maybe the enlarged trigger guard. The manipulators are not double-sided.

The handguard is a self-supporting element made of aluminum alloy covered with weight-reducing cutouts and M-LOK standard mounting points. The latter were placed at the bottom and on the sides, as well as on the slants in front part of the handguard. The top is covered with a long section of a Picatinny accessory rail, extending the one on the upper receiver.

The barrel is 16.1 inches long and is finished with a proprietary flame suppressor. The gas system is pistol-length (pistol, carbine, mid, rifle) due to the relatively low-pressure of the round designed to work with short barrels and silencers.

Some might ask, "Since the .300 BLK is adapted for short barrels and silencers, why did the manufacturer use a sixteen-inch barrel?" That is because the US law, namely the "National Firearms Act" severely restricts the possession of weapons with barrels shorter then 16 inches, or overall length below 16 inches. To this end, you must pay a tax of 200 USD and submit an application that will take from several months to a year to process. In addition, it is difficult to cross state borders with such weapons. Hence the existence of such inventions as the "slabilizing brace", which (in a nutshell) classifies a short-barreled rifle as a "pistol". Its a long story, maybe someday we will deal with NFA analysis at WMASG.